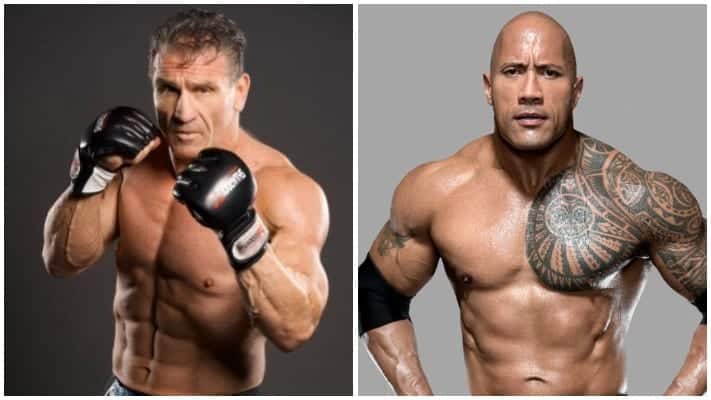 During an appearance on Casual Conversations with The Wrestling Classic, Shamrock revealed he gave the WWE and Johnson permission to use ‘The Rock’ name.

“Anything that had to do with the cage or Lion’s Den, they had to go through my approval, because I owned all that. I have [it] in my contract, I own that. In fact, funny story is that The Rock, he was known as Rocky. [They] had to have my permission to use the name The Rock because I owned Ken ‘The Rock’ Shamrock. That’s what I was known as when I was first fighting in the UFC. They called me Ken ‘The Rock’ Shamrock so I had that carved out too but anyways, so the cage, the Lion’s Den cage and all that stuff so it had to be something that had to be approved by me which I was fine doing, but a lot of the creativity that went into that I think had to do with a lot of the creative writers and the people at the WWF with the weapons and all that stuff but, I came up with the actual slang of the actual cage itself. Instead of just being a straight cage, I wanted to angle a little bit because that gave us a chance to actually work off that cage, because if it was straight up, you ain’t shooting him into the cage because it’s — you’re gonna get stuck in there, right? So by having an angle, you can run up on it, you do all kinds of gimmicky stuff on there so, there was a lot of creativity [that] went into that but I was a part of that creativity for sure.

Shamrock went on to reveal he never made any money from the name and was happy to stop using it once Johnson became a wrestling superstar.

“No [I didn’t make any money from ‘The Rock’ name]. You know what man? The Rock came up and started using it. Nobody even knew the issue at all. I didn’t because I was never kind of — I never liked that, right? Just like when they came up with the dolls that had the lion skin on it with the shorts on it, I owned that. They never asked me to do that, they didn’t ask to do that so therefore I own that, so I could’ve gotten all that too but you know what? I was fine with where I was at. It didn’t matter. So, and me and Rocky, we talked about it one time. He didn’t even know. He’s like, ‘Really!?’ I said, ‘Yeah. Don’t worry about it. No big deal.’ It’s like, ‘I’m not gonna do anything for that’ so it’s like, I’m known as The World’s Most Dangerous Man now.” (Transcribed by RingsideNews)

Do you think Ken Shamrock should’ve been compensated for allowing the WWE & Dwayne Johnson to use his name?