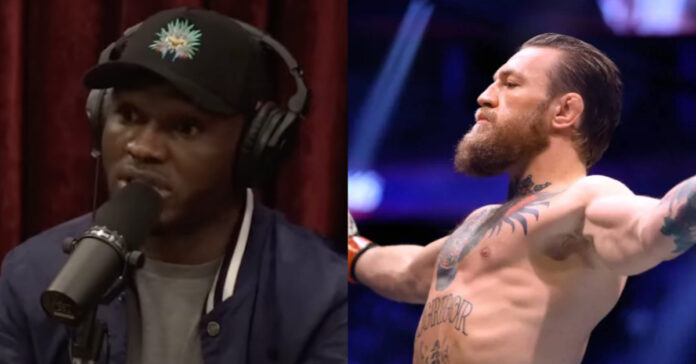 At UFC 278, Kamaeu Usman appeared to be on his way to securing yet another title defense, up until the final minute of the fight, when his opponent, Leon Edwards, was able to pull a rabbit out of the hat and knock out the welterweight champion with a snapping left high kick which deafened the Salt Lake City Crowd.

It didn’t take long for the ‘Notorious One,’ who is looking to make a comeback at 170lbs, to quickly begin to mock the former pound-for-pound king in a series of Twitter posts.

Post-fight footage emerged of Kamaru Usman’s eight-year-old daughter crying as she witnesses her father get knocked unconscious, which evoked a response from McGregor.

“I feel this deep. I do not suggest bringing family whatsoever. Especially the children,” McGregor posted.

“This is different fighting. I’ve done both sides of this and feel going to the mission solo is best. You can see family again post-battle.”

‘The Nigerian Nightmare’ made an appearance on Joe Rogan’s podcast following his UFC 278 defeat, where he revealed he first saw the video of his daughter crying whilst he was in the hospital.

“The camera pans into the audience and they showed my daughter, my daughter cried and it was the weirdest thing. It was an instant trigger response. My heart, I wanted to cry just seeing that from her,” Usman said.

Despite what happened Usman still insists he will continue to bring his child to his fights, as he believes it is important for her to watch him fight as it provides her with important life lessons, struggling with adversity and going back at it.

“Conor tweeted something, kind of blasting me for bringing her to the fight and this and that … He tweeted some mean things and it’s just like, ‘How low are people sometimes?’ Usman questioned.

“Absolutely, I’m going to bring her. My daughter is not only going to see when Daddy is victorious, Daddy gets to beat everybody and Daddy get’s to put her in the best school or wherever she wants to be.”

“I am blessed right now with an opportunity to show my daughter that, ‘Look, you can fall down and look how you can get back up.”

There is no knowing just yet when we will see Kamaru Usman back in the Octagon but there is no doubt he will be in there again.

Do you think Kamaru Usman will become a Champion again?