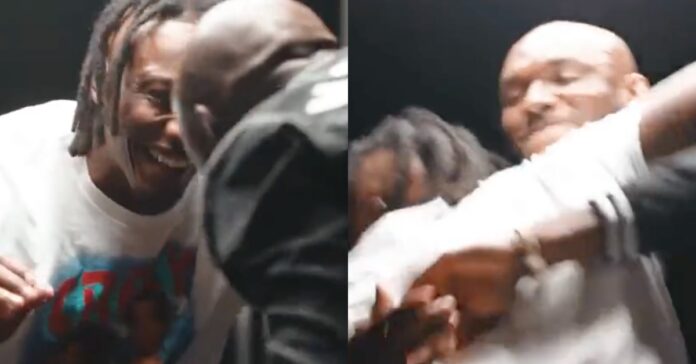 Former Denver Broncos and Seattle Seahawks wide receiver, Brandon Marshall attempted to both size up and wrestle reigning UFC welterweight kingpin, Kamaru Usman ahead of the latter’s Octagon return at UFC 278 this weekend – resulting in a rather awkward scuffle and tumble between the duo.

Marshall, a former wide receiver for the likes of the Denver Broncos and the Seattle Seahawks, last featured in the NFL back in the 2018 season, with the 38-year-old Pennsylvania native since retiring from professional football.

For Usman, the dominant UFC welterweight champion and pound-for-pound list leader, is scheduled to return to the Octagon this weekend in the main event of UFC 278 against the #2 ranked, Leon Edwards, chasing his sixth successful title defense as well as a second career win over Edwards whom he defeated back in December 2016.

Kamaru Usman has flirted with a light heavyweight leap once again

Entering his since promotional perfect UFC tenure off the back of The Ultimate Fighter success, decorated amateur wrestler, Usman has since favored his striking largely in notable title knockout wins over the trio of Colby Covington, Gilbert Burns, and Jorge Masvidal, however, had his wrestling tested by the aforenoted, Marshall during an lumbersome, impromptu tangle.

Urging Kamaru Usman to take off his glasses and stand up in a bid to measure the Auchi native up against himself in terms of stature, Marshall locked hands with Usman, before attempting to secure a pair of over hooks.

Countering landing his own under hooks, Usman then almost instantly locked his hands behind Marshall’s back, backed the Philadelphia wide receiver backwards and felled him to the set floor. (H/T Bloody Elbow)

READ MORE:  Gregory Rodrigues speaks out after insane UFC comeback: ‘My wife is mad but the doctor did a great job'

Set to return after a nine-month layoff, Kamaru Usman, now under the tutelage of Trevor Wittman at ONX Labs, managed to hand the aforenoted, Covington a unanimous decision loss in the headliner of UFC 268 last November at Madison Square Garden.