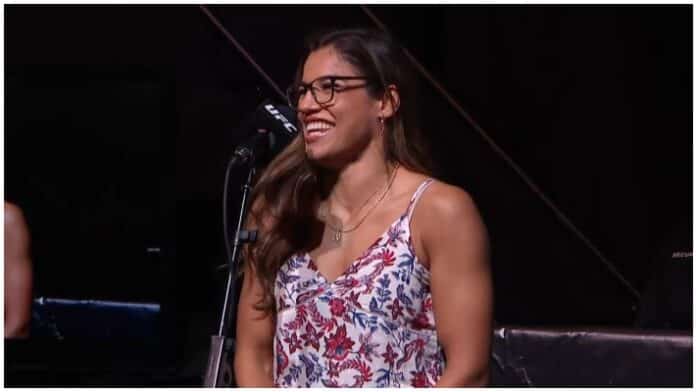 Julianna Pena is no longer in the co-main event slot for UFC 265 but that hasn’t stopped her from showing up for fight week festivities anyway.

Pena was due to get her shot at UFC gold on Saturday night. ‘The Venezuelan Vixen’ was scheduled to face off against Amanda Nunes for the bantamweight title at UFC 265.

Unfortunately, Nunes and her family recently tested positive for COVID-19 and the fight was scrapped.

Pena clearly wasn’t a fan of that excuse and took her chance to ask Dana White why the fight isn’t going ahead this weekend during her surprise appearance at the UFC 265 pre-fight press conference.

“She has COVID,” White responded with a laugh.

“It’s not too late to get her here I heard that she tested negative,” Pena added.

“When? I heard December,” Pena stated. “Is that true?”

“I don’t know if that’s true or not,” White said. “We’ll see how this plays out. Soon. As soon as we can make it, we’ll make it. Alright? Thank you. Good to see ya.” (Transcribed by BJPENN.com)

Nunes got wind of the interaction and took to social media to respond.

“Hey @VenezuelanVixen Did you ask about me?” Nunes tweeted. “I’m here in sunny south Florida. I’m just as excited to see you too. Hopefully soon. Btw. You looked great tonight.”

“Yes I did ask about you. When? When’s going to be good for you? I heard from a teammate you’ve hardly been training for this fight even when you’ve been healthy,” Pena replied. “Did you know you were going to do this all along?”

When do you think we’ll finally get to see Amanda Nunes vs. Julianna Pena?