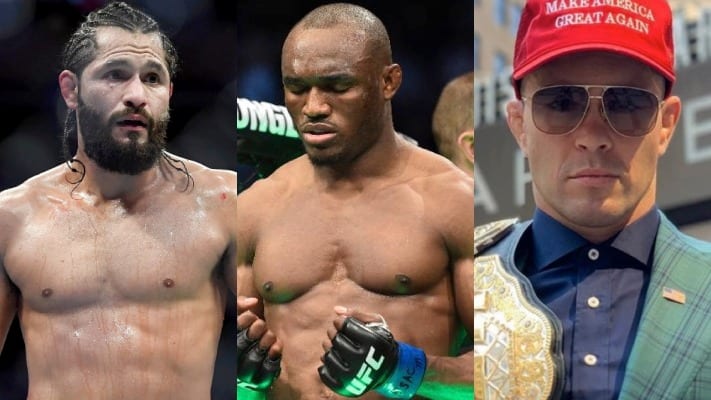 Jorge Masvidal is not impressed at all by UFC 245 headliners Kamaru Usman and Colby Covington.

The pair are set to collide in a heated grudge match for the welterweight title on December 14 in Las Vegas. And whoever walks away as champion on the night could end up facing Masvidal next.

But despite both fighters holding a professional 15-1 record and dominating virtually every opponent they have faced inside the Octagon, “Gamebred” isn’t particularly worried about either fighter, especially based on their recent performances.

Covington threw a record 515 attempted significant strikes in his unanimous decision win over Robbie Lawler at UFC Newark back in August. But the one thing Masvidal observed from the 25-minute affair was Lawler not getting hurt once:

“In some aspects, yeah [it was impressive], because he threw 500 punches but never hurt Robbie once,” Masvidal said in a recent interview (via The Body Lock). “If you’re just doing this [imitating soft jabs] because you got the guy tired from wrestling, I don’t know. I don’t give you credit.

“Like they always say, it’s so cliche, but there’s levels to this, you know. There’s a reason why Colby wouldn’t want to fight — if he could pick guys he wouldn’t want to fight. There’s a reason why he was saying we weren’t talking for a year and a half. ‘He’s my best friend’ — he was just saying that like four or five weeks ago that I’m his best friend. Now, all of a sudden I’m his mortal enemy?

“The guy has his wires crossed, especially when it comes to me. He got to train with me a little bit so you can imagine the trauma I’ve put him through.”

As for Usman, Masvidal took issue with the champion’s lack of offensive grappling and believes “The Nigerian Nightmare” lacks a kicking game:

“Not at all [impressed with Usman],” Masvidal added. (via MMA Fighting). “I think there’s some things he does well, which is kind of stall. He just gets to a leg and takes guys down. I’m a fan of grappling but I like to see grappling offensively.

“He can’t kick nothing. It’s like me saying there’s a MMA guy that’s a great, great boxer technique-wise, nah, it’s like he’s a great boxer for MMA. Maybe Usman’s a good kicker for YMCA, the public club, but he’s not kicking me. The guy would never land a kick on me.”

Masvidal Separating Himself From The Pack

Masvidal’s popularity has increased so much that a title fight may actually be low in his desired pecking order for a next fight.

And when it comes to Usman and Covington, they don’t seem to be fighters that excite the former Strikeforce standout:

“I got into this sport to separate myself from the pack and beat the crap out of guys. Those guys don’t do it,” Masvidal added. “What I did this year, I got three stoppages. They haven’t done that their whole career.

“This is math speaking, this is not opinion. You can look it up. What I’ve done this year, they haven’t done their whole careers.”

What do you make of Masvidal’s assessments?