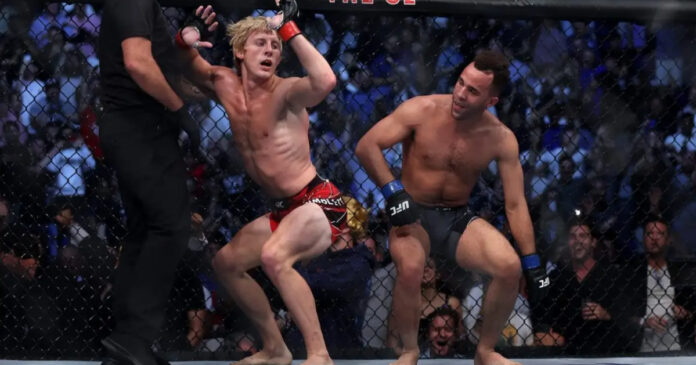 Taking his recent UFC London submission loss to Paddy Pimblett in his stride – Jordan Leavitt has now joked that both the city of Liverpool, and the site of his defeat; The O2 Arena in London is “a dump”.

Leavitt, who entered his main card matchup against polarizing Merseyside native, Pimblett off the back of a split decision victory over Trey Ogden earlier this year, was forced to tap against the former Cage Warriors featherweight titleholder via a second round rear-naked choke.

For Pimblett, the outspoken Huyton native managed to land his third straight win during his 10-month Octagon tenure, as well as his third consecutive finish – off the back of a knockout win over Luigi Vendramini, as well as another submission success against Kazula Vargas, the latter of which in the capital back in March.

Jordan Leavitt admits he was surprised by Paddy Pimblett’s popuiarity

Reflecting on his loss to Pimblett, Leavitt claimed that he was surprised by the former’s “fandom” in the capital – joking that Liverpool and the arena where he suffered defeat were both “dumps”.

“The U.K. is the size of Alabama, man – that’s very small,” Jordan Leavitt told The MMA-Holes during a recent interview. “And the fact that their guy (Paddy Pimblett), in this little small blip of the world it that popular, how could you not follow him, you know?”

“He’s from Liverpool – Liverpool is a dump, you know,” Jordan Leavitt continued. “Like, and so is – the O2 Arena is also a dump.”

Eyeing a return to the Octagon before the close of the year, Pimblett has called for a hometown return at Anfield stadium, while UFC president, Dana White, has claimed that he hopes to field the Next Generation MMA staple in both New York City, and then Las Vegas before a return to the United Kingdom.

A product of Dana White’s Contender Series, Leavitt, a product of Syndicate MMA in ‘Sin City’ – has landed Octagon wins over Matt Wiman, Matt Sayles, and the aforenoted, Ogden.