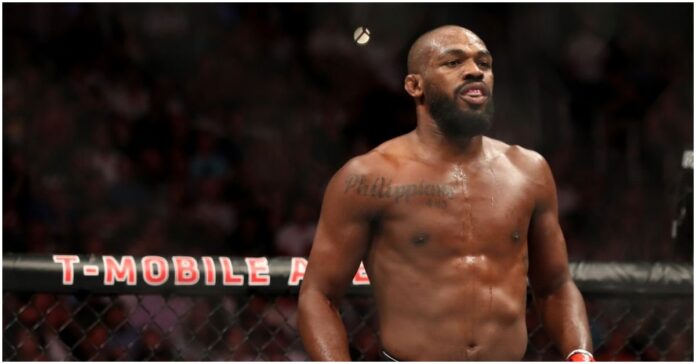 Jon Jones may now finally be getting closer to making his heavyweight debut.

Jones relinquished his light-heavyweight championship in 2020, with the intention of jumping up weight class in 2021. However, for various reason’s Jones wouldn’t compete in 2021 and instead spent the time working in the gym, trying to put on the extra weight needed for his new division.

It now appears he may finally have one, rumours have been circulating that Jon Jones would take on the winner of Francis Ngannou Vs. Cyril Gane after the top two heavyweight’s clash later this month. No date has been confirmed for the matchup; however, it appears Jones has been putting in the hours preparing after posting a video on his Instagram updating his following.

“I spent the last few days locked inside my office studying myself and possible future opponents. I’m excited to figure out my next opponent so I can start focusing on my energy even more. This is my favorite kind of homework,” Jones said in a post on social media.

Jones hasn’t fought since his extremely close decision victory over Dominic Reyes back at UFC 247, but in an interview with KRQE ‘Bones’ did reveal a rough timeline of when he would like to return to the octagon.

“I’m looking to fight somewhere in April, possibly Madison Square Garden, or a total opposite date, possibly July at International Fight Week, those are the two dates that I’m kind of eying. I think it’ll depend on who wins in January between Francis Ngannou and Ciryl Gane, and we’ll just take it from there.”

Jones will have to wait to see how UFC 270 unfolds before he can begin seriously preparing for his next opponent and to see who hell be facing for that heavyweight crown.

Who would you like to see Jon Jones fight in his UFC heavyweight debut?