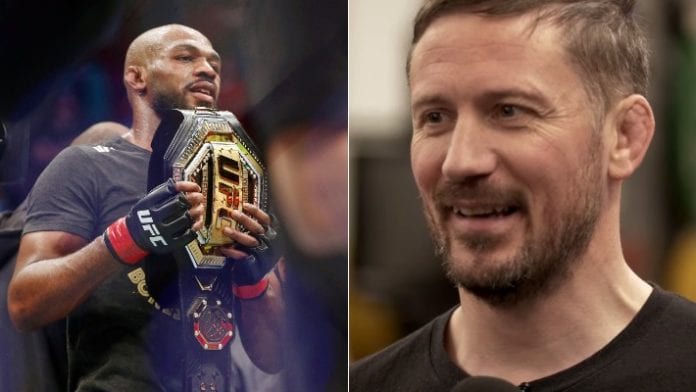 There was a ton of controversy surrounding the scoring of last night’s (Sat. February 8, 2020) main event at UFC 247.

Jon Jones put his light heavyweight championship on the line against Dominick Reyes. Jones and Reyes went five rounds in a very close fight, that many believe Reyes actually should’ve won on the scorecards, giving the challenger the first three rounds, while the final two were fairly clear for “Bones.” With that being said, the Texas judging awarded Jones the decision win by way of a unanimous decision.

Even one judge scored the fight 4-1 for Jones, a scorecard Joe Rogan called “insane.” However, according to Conor McGregor and SBG Ireland head coach John Kavanagh, he scored it a fairly “clear victory” for the defending champion. Taking to Twitter, Kavanagh explained that, even though he’s probably wrong to do so, he scores the championship rounds higher than the first three.

“I know I’m wrong to do what I do because I’m not a trained judge but I will always weight later rounds more heavily than earlier ones. I ask myself who would survive a no time/rule encounter. Because of that it was a clear @JonnyBones victory for me.”

It will be interesting to see how the UFC handles things with Jones and the light heavyweight division moving forward. The consensus within the MMA community seems to be that the judging in Houston was horrendous, and Reyes was not given a fair shake. Given that, there has already been chatter of an immediate rematch, something even UFC president Dana White hasn’t shut down.

What do you think about Kavanagh scoring the UFC 247 main event for Jones?