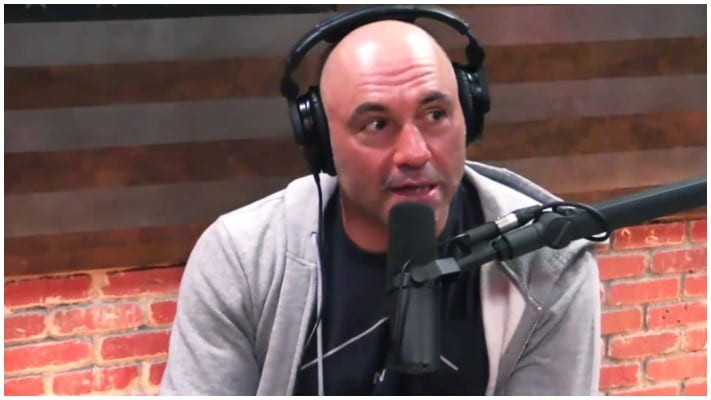 Paul was one of the main talking points of the night aside from the fights themselves, due to face-to-face confrontation with UFC analyst and former two-division champion Daniel Cormier during a commercial break and with fans chanting “F**k Jake Paul!” numerous times during the evening.

In a recent podcast segment, Rogan talked about the recent beef between Cormier and Paul and what people should understand about the YouTuber turned Boxer.

“Well, he wants to make some money and he’s a very clever fellow,” Rogan said during his most recent podcast. “Sold out arena, and they were all chanting ‘F*** Jake Paul.’ He’s got his phone out, he’s like, ‘Yeah!’ (Because what he’s hearing is) money. He’s hearing ‘Cha-Ching! Cha-Ching!’ He said it was 1.5 million PPV buys when he knocked out Ben Askren. I don’t know if that’s true, Dana White says it’s nonsense, but maybe.”

Paul is just weeks removed from his viral knockout over Ben Askren in his last Boxing match and has quickly turned the page to calling out stars from around MMA including Nate Diaz, Conor McGregor, and Cormier. Rogan also said that the amount of money generated around Paul is not something for fans and critics alike to dismiss, as he’s turned into one of the most talked-about fighters on the planet.

White also spoke about Paul’s run-in with Cormier and the interest that he has generated from around combat sports as a whole.

“The kid is making money, man. He makes people care,” White said in an interview with Morning Blitz. “I know there’s a lot of people who are very excited for the day when he gets clipped and gets knocked out and it’s coming. His 15 minutes are almost up but listen, the kid’s gonna make some money and good for him.”

It’s always interesting to hear from the voice of the octagon, along with the UFC president on matters involving the UFC and the drama that sometimes comes with it. While it’s unclear what’s next for Paul in his young boxing career, it appears that he’s garnered the attention of some of the most notable personalities in combat sports.

Do you agree with Joe Rogan and Dana White’s comments regarding Jake Paul and his dramatic appearance at UFC 261?