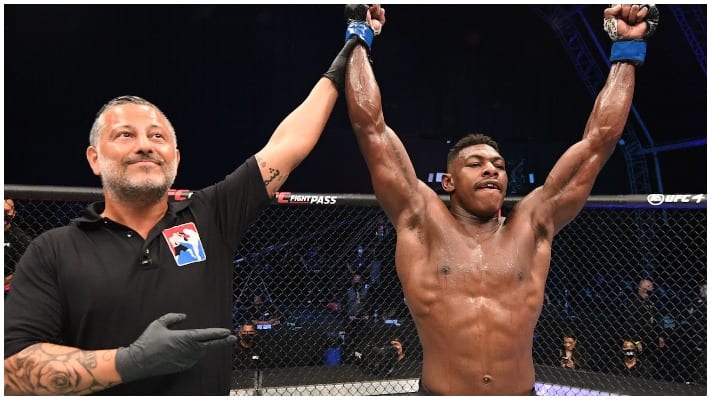 Middleweight prospect Joaquin Buckley insists he will continue to work at Walgreens for the foreseeable future despite making a splash since joining the UFC earlier this year.

Buckley got a late notice call to face off against Kevin Holland back in August. On that occasion, he was tough and gritty but ultimately fell short against Holland who is now set to main event opposite middleweight #3 Jack Hermansson on December 5.

A couple of months later and Buckey was back in action against unbeaten, highly fancied prospect Impa Kasanganay. ‘New Mansa’ pulled off one of the most epic knockouts in MMA history to snatch Impa’s hype, undefeated record, and a cool $50,000 bonus. This past weekend Buckley fought against another unbeaten fighter in Jordan Wright. Buckley scored a vicious knockout win and picked up another $50,000 performance of the night bonus.

In an interview with TMZ Sports, Buckley revealed despite having a fledging career in the UFC and earning a significant amount of money from that career in 2020 he will continue to work as an assistant manager at Walgreens.

“The thing is besides UFC and they’re giving me these big checks, I still don’t have a business of my own,” Buckley said, “So, I need to just keep working and still having that working mentality and work ethic. So, I’m gonna just keep holding down a job.

“If I’m able to make a business for myself and start up a business for myself. I think it a perfect opportunity to shout this out right now,” Buckley added. “We are starting up a clothing apparel line – Solid Foundation… Besides that we are going to still work at Walgreens. Until my business is off the ground you know we still gonna be working for Walgreens.”

Do you think Joaquin Buckley can become a top contender while working at Walgreens?