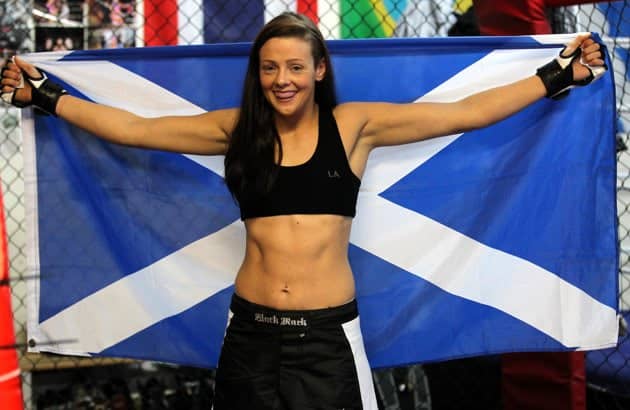 After a shocking upset loss to Maryna Moroz at April’s UFC Fight Night 64 in Poland, Scottish Muay Thai expert Joanne Calderwood will look to get back on track in her native country.

No. 9-ranked Calderwood will take on fellow The Ultimate Fighter (TUF) 20 competitor Bec Rawlings at July 18’s UFC Fight Night 72 from Glasgow. Rawlings recently picked up her first UFC win by submitting Lisa Ellis with a thrilling first round rear-naked choke at May 10’s UFC Fight Night 65 from her native Australia.

The popular former Invicta title challenger lost her first official bout in the Octagon, dropping a unanimous decision to Heather Jo Clark at December 2014’s TUF 20 Finale. Calderwood was the exact opposite, defeating Seohee Ham by unanimous decision on the card before getting submitted in her next bout.

UFC Fight Night 72 will go down from the SSE Hydro Arena in Glasgow. With the addition of Calderwood vs. Rawlings, here is the current lineup for the card: