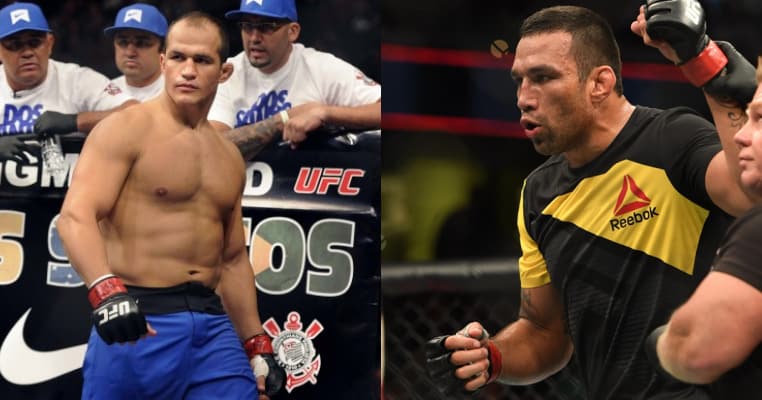 Former UFC heavyweight champion Junior “Cigano” Dos Santos was scheduled to rematch Stefan Struve in the main event of UFC Fight Night 105 on Feb. 19, 2017 in Halifax, but Struve was recently forced to withdraw from the bout due to injury.

As far as Dos Santos’ knows, the UFC is looking for a replacement opponent, and he has continued to train in hopes of the promotion finding one:

“We don’t really know the situation,” Dos Santos told MMAjunkie. “What the UFC told us is that they’re looking for an opponent, especially because we were the main event in Halifax. So I’m still training and awaiting news.”

“Cigano”, who is coming off of a dominant victory over Ben Rothwell last April, admits that the situation is a frustrating one especially given the fact that it was tough for him to find a fight in the first place:

“It’s very frustrating, to be honest,” Dos Santos said. “It’s tough, because you know how hard it was to find an opponent. I think many things were happening in the division, but we weren’t able to find an opponent. A few of them were injured, others serving suspensions, others with fights booked and others who wouldn’t take the fight – which for me is kind of absurd, but OK. Unfortunately, (Struve) got hurt. I can’t judge things without knowing, and I’ve been in his position before, so I can only wish him a good recovery so he can return as fast as possible. Who knows – maybe in the future we can fight.”

As far as a potential replacement opponent goes, the likely choice would appear to be former champion Fabricio Werdum. “Vai Cavalo” was scheduled to rematch fellow ex-champion Cain Velasquez at Dec. 30, 2016’s UFC 207, but Velasquez was forced to withdraw from the bout after failing to receive medical clearance from the Nevada State Athletic Commission (NSAC).

Dos Santos and Werdum have already fought before, with JDS knocking out his Brazilian counterpart with a brutal uppercut in in 2007. With both men still ranked towards the top of the division, a rematch appears to make sense, although JDS claims that Werdum has ‘refused’ to fight him three times over the last few months:

“Werdum was the UFC’s first option,” Dos Santos said. “Before even talking to me, they’d talked to him. But once again, I think he turned it down. I don’t know the reasons, but once more he turned it down – I believe it was the third time in these past few months that he refused to fight me, which is kind of senseless. He turned it down (and) the UFC went after other opponents. But, really, if you look at it, it was so hard to find a fight for me before Stefan Struve.”

Werdum has said that he’s only interested in fighting for the title, but would you rather see him take on Dos Santos?