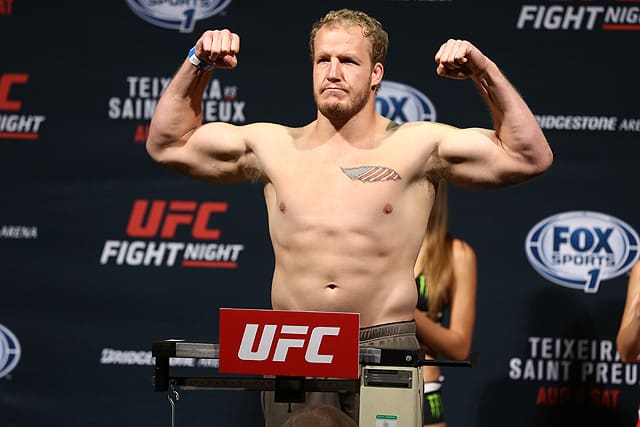 The third bout on the main card of UFC Fight Night 73 featured a heavyweight clash between Timothy Johnson (9-2) and Jared Rosholt (13-2).

The two heavyweights engaged in a clinch battle with Johnson’s back being pressed towards the fence. He attacked the body of Rosholt, who responded with a knee to the leg. Johnson reversed the position briefly and landed a heavy knee to the body. Johnson was able to get a takedown, but Rosholt popped back up.

“”The Big Show” held on for a guillotine choke, but it was no danger to Johnson. Referee Herb Dean separated both men and the action resumed at the center of the Octagon. Rosholt quickly changed levels and got Johnson down to the mat. Rosholt transitioned and locked in an arm triangle. Johnson was able to defend it and landed an elbow on the bottom. Round one came to a close with “The Big Show” in control.

At the start of round two, Johnson landed some solid right hands. Rosholt was able to clinch with Johnson to avoid more heavy strikes. Johnson connected with a punch off the break, but chose to stay in the clinch.

Rosholt whiffed a winging hook. Johnson latched on a body lock and threw Rosholt to the ground. Johnson’s sloppiness cost him the position, and Rosholt was to get his opponent on his back. Rosholt looked for an arm submission, but he let go and the horn sounded.

Round three saw Johnson land some inside strikes, but he couldn’t avoid the wall and stall of his opponent. Rosholt put Johnson down on the mat. Johnson tried a guillotine and later a kimura, but all he did was expend energy. Dean broke both fighters up from their position and the fight was back to the standup.

Johnson telegraphed a knee. He tied up Rosholt despite not having success in that area the entire fight. Johnson connected with winging hooks that stunned Rosholt, but he took his opponent down instead of going for the knockout and the final horn sounded.

“The Big Show” won two rounds and the fight in the eyes of all three judges.