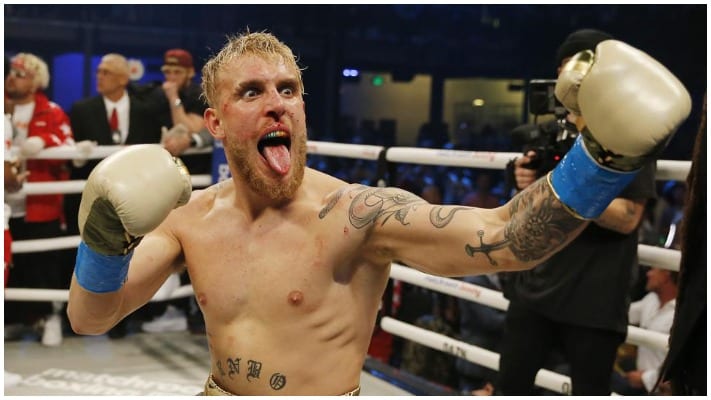 When Jake Paul and Ben Askren meet in the ring a week from tomorrow, Paul plans on ending the match in a rather violent and bloody way. Paul went to the extreme lengths of even mentioning that Askren’s family should not plan to watch.

“You think this is a f*****g game, you think is a fun payday, you think this is a way to get clout and you might be right,” Paul said in a video to Ben Askren on Logan Paul’s podcast. “I promise April 17 will be the worst day of your f*****g life. Just as I asked Nate Robinson’s kids not to watch the fight, I will ask your kids to do the same. So, Ben Askren’s kids, wife, please don’t watch this because your dad will be bloodied, unconscious on the f*****g canvas (on) April 17. I don’t want you to see that.

“You f****d up, Ben by taking this fight. April 17, I promised my team, my family, my brother who is there right next to you right now, I promise to make you go down as history as the world’s worst UFC fighter. You are dumb as f**k, bro,” Paul said. “April 17 I will show the world how big of a bitch you are. I will make you my bitch. I f*****g promise that.” (Transcribed by BJPENN.com)

While one could make the argument Paul has gone a little far with his trash talk, there is no doubt there has been a significant build up and should sell a good amount of PPVS on April 17th.

Do you think Jake Paul has taken his comments too far by including Askren’s family? Who wins Next Saturday?