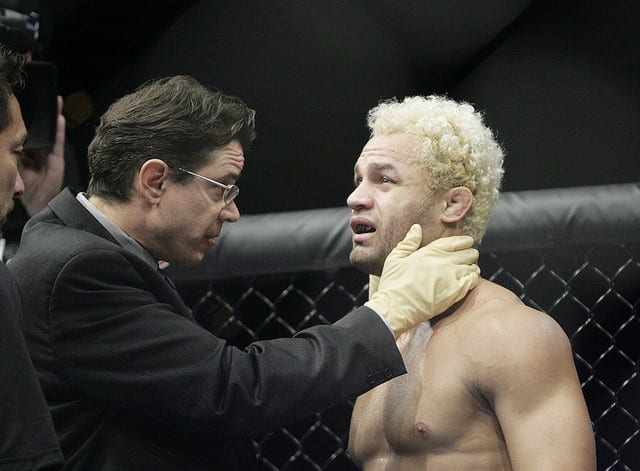 This afternoon The Los Angeles Daily News confirmed that Jake Ellenberger will fight Josh Koscheck in a pivotal bout for both men’s careers.

Ellenberger was thought to be the future of the UFC welterweight division when he destroyed Jake Shields with a first round TKO in September 2011, but “The Juggernaut” has failed to win a fight since his uninspired loss to Rory MacDonald at UFC on FOX 8 in July 2013.

Ellenberger returned to face current title contender Robbie Lawler at May’s UFC 173, but his woes only continued when “Ruthless” finished him with a vicious third round barrage.

His losing streak was extended to three after up-and-coming prospect Kelvin Gastelum submitted him at UFC 180 on November 15.

Meanwhile, Koscheck has been out of action since a devastating knockout loss to No. 3-ranked Tyron Woodley at UFC 167 in November 2013. Prior to that, he was finished by Lawler in a then-upset at UFC 157 and edged out by Johny Hendricks in a controversial decision at UFC on FOX 3.

The 37-year-old former title contender has obviously seen better days in his career, but he’s fought the absolute best of the best during his recent down streak.

The two were supposed to throw down for much higher stakes at UFC 151 in September 2012, but an injury to “Kos” forced their first meeting to fall apart. It’s safe to say that either man fighter will rightfully be cut with a loss.

UFC 184 features the awaited middleweight championship bout between Chris Weidman and Vitor Belfort. Dominant women’s bantamweight champion Ronda Rousey will also finally square off with longtime No. 1 contender Cat Zingano in the co-main event, and we could see the next 185-pound title contender emerge when No. 2 “Jacare” Souza meets No. 6 Yoel Romero.