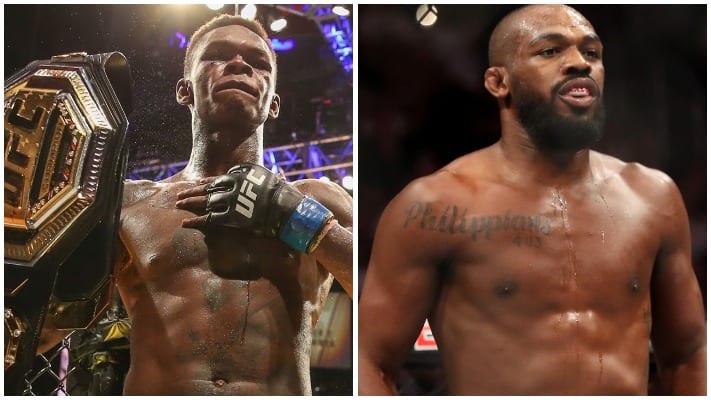 UFC middleweight champion Israel Adesanya says he will continue to chase a fight with Jon Jones despite the fact the former 205lb king has decided to step up to heavyweight.

Speaking to press at a recent virtual media day Adesanya claimed his plan to fight Jones remains unchanged, he said.

“One hundred percent. It doesn’t change my plans. My plan is still going forward as planned. So, yeah, same thing.

“Look how long it took him to move up to heavyweight, finally. Like I said, he was expecting me to do it straight away, when I hadn’t even defended my belt yet. I’ve defended my belt twice now, I want to defend it a few more times and then do what I set out to do. But, yeah, the pot calling the kettle black on his part. (Tsk tsk). Go put some f*cking muscle on your chopstick legs and go fight Francis Ngannou and watch him break you. I hope he doesn’t, though. Maybe he does. Who knows?”

First up, Adesanya defends his 185lb strap against Paulo Costa at UFC 252. ‘Stylebender’ is hoping to put on an exciting fight after his UFC 248 main event against Yoel Romero failed to deliver.

“This is perfect,” Adesanya said. “What I was expecting from my last fight is going to happen this fight. Bro, you can’t understand. In my story, you just can’t just have it going good and going great in the story. You need a dip, you need a valley when things go to sh*t, and that was me after the last fight, the performance that Yoel Romero brought. He was lackluster. I’ve never been in a boring fight in my life. I had all this criticism, justly or unjustly. That was a dip, and now this is the rise back.

“What better antagonist than this guy, who was undefeated, a KO artist, he looks the way he does, ballooned up? It’s like David and Goliath. I f*ck this guy up, and it’s spectacular. As they say: Someone’s 0 has got to go. It’s a beautifully set up story. You couldn’t write this sh*t. You could, but it’s real.” (Transcribed by MMA Fighting)

Do you want to see Israel Adesanya vs. Jon Jones at heavyweight?