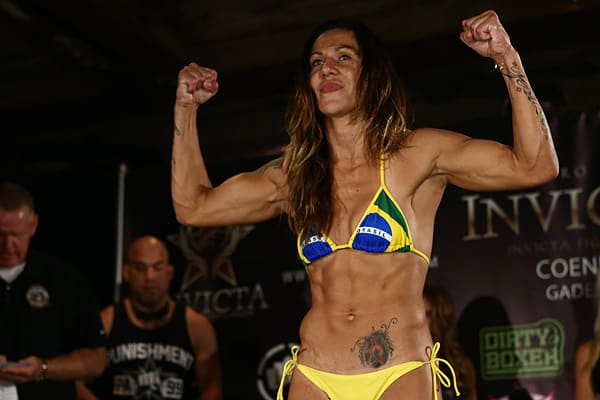 Tonya Evinger (c) vs. Irene Aldana is up next in a bantamweight championship bout. Aldana slipped early in the round and Evinger swarmed on her with strikes. They scrambled on the ground to calm things down. Evinger worked her over in the mount with strikes and then went for an armbar. She locked it in deep, but with heart, Aldana held on and got out of the submission late in the first round. Evinger would go on to use her big time takedown skills that would have her dominate entire rounds while in top position and in mount. Evinger fired away with strikes, but Aldana hung in there as she was one tough cookie. However, in the end of the fourth round, Evinger finished her off with strikes from the mount.

Herica Tiburcio (c) vs. Ayaka Hamasaki is up next in an Atomweight championship bout. Tiburcio hurt Hamasaki with a body strike that had Hamasaki crumble to her feet early on in the first-round. Tiburcio jumped on her and went for a guillotine choke, but couldn’t finish. Hamasaki controlled most of the second round by setting herself up in top position in guard. At the end of the round, Tiburcio went for a guillotine choke and the bell rang, but she held on to it for a few seconds afterwards that was a bit unsportsmanlike. Later in the fight, Hamasaki used her takedowns and her ground grappling to her advantage. She controlled the fight through and earned a unanimous decision to become the new champion.

Pannie Kianzad vs. Jessica-Rose Clark is up next in a bantamweight bout. Both girls clinched for the majority of the first round with Kianzad getting a late round takedown. Kianzad worked in some knees to the body of Clark to lead to a hip toss into a takedown to begin the second round. Kianzad tried for an inverted triangle, but Clark got out of it halfway through the second round. At the end of round three, Clark hurt Kianzad with a knee to the ribs and tried to finish as Kianzad back peddled, but time expired and we went to the judges. They ruled the fight in favor of Pannie Kianzad by unanimous decision.

Amy Montenegro vs. Jamie Moyle is up next in a strawweight bout. Moyle pressed the action early in the first round. They clinched on the fence, which led to Moyle getting a trip takedown. Both girls attempted submissions on the ground, but neither could get a finish. Moyle hurt Montenegro three times in the second round. Twice with a right hook and once with a push kick to the ribs of Montenegro. All three times she could never capitalize on the situation as Montenegro throwing combos like no other. In the third round, things slowed down and it was much of a technical fight. Judges rule it in favor of Jamie Moyle by split decision.

READ MORE:  Marvin Vettori Doubts Jared Cannonier Defeats Israel Adesanya At UFC 274: 'I Don't Think There's Much He Can Do'

Opening the card is a featherweight bout between Marina Shafir and Amber Leibrock. The fight doesn’t last long as Shafir attempted to rush Leibrock moments into the fight, but Leibrock caught her with an overhand right hand that dropped Shafir. Leibrock got on top of her and finished her with several right hands to the jaw of Shafir for the finish.