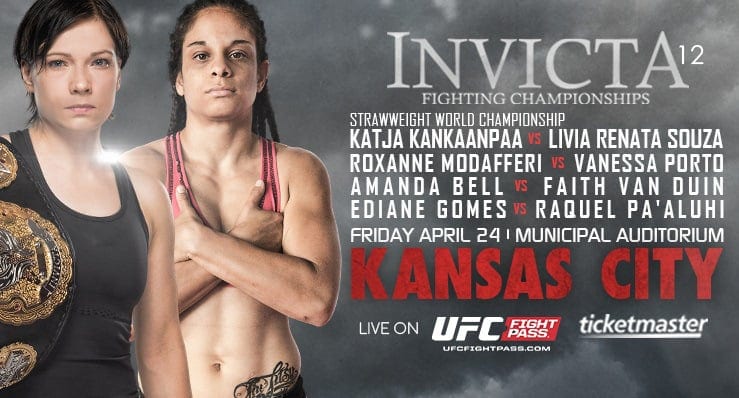 Tonight’s (Fri., April 24, 2015) Invicta FC 12 is in the books from the Municipal Auditorium in Kansas City, Missouri.

In the main event, Katja Kankaanpaa put her strawweight title on the line against Livia Renata Souza, who rocked the champion with a big shot before taking her back to look for a choke and score with ground punches. Kankaanpaa turned the tables with top control in the middle rounds, but the tables soon turned. Souza cinched in a tight triangle/armbar in the fourth round, persevering to earn the tap and the championship.

The Ultimate Fighter (TUF) 18 veteran Roxanne Modafferi met Vanessa Porto in the co-main event. Porto landed some big strikes in the second round, rocking Modafferi. She rode a late takedown to a 30-27 score on all of the judges’ scorecards.

READ:  EXCLUSIVE | Claressa Shields Reacts To Fury vs. Wilder III: 'It Was A Great Trilogy'