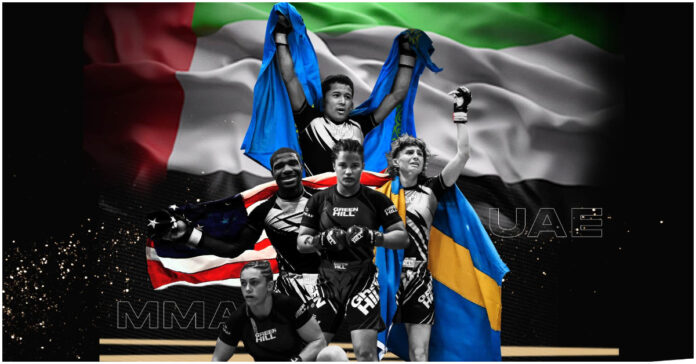 The 2021 IMMAF ( International Mixed Martial Arts Federation) World Championship begin this week (Jan 24-29), with the tournament taking place in Abu Dhabi, the capital of the United Arab Emirates. The event was initially set to be held last November in Kazakhstan, but the rapid rise of Covid cases in the Central Asian nation forced a location and date change.

This week’s event will see athletes from over 30 different nations competing inside the IMMAF cage as they each strive for gold. Amateur MMA is still developing, but the competition grows more competitive each year.  Former IMMAF bantamweight junior world champion Muhammad Mokaev will make his highly anticipated UFC debut on March 19 and he looks set to be the first of a new wave of IMMAF fighters making their way to the pro ranks.

Here are a few of the top prospects to watch out for when the World Championship kicks off.

The 24-year-old Gitinov is the reigning welterweight world champion and a stablemate of Mokaev at KHK MMA. The Dagestan-born fighter who competes under the Bahrain flag is, as one would suspect, a skilled grappler. BRAVE CF Super Lightweight Champion Eldar Eldarov, who trains Gitinov, has been developing his young charge’s striking, and with each outing he seems to be improving. After Covid forced the cancellation of almost all IMMAF events in 2020, Gitinov finally returned to action at last year’s European Championships in Kazan, Russia where he won the gold medal. He is ranked No.1 in the IMMAF pound-for-pound list, and it is hard to see anyone taking that spot off him in the near future.

The 21-year-old Jordanian has been training in martial arts since he was five years old, and his talent is backed with a sense of showmanship. At last year’s World Cup in Prague, Czech Republic, Kayali could be seen talking to his opponents and chatting with the camera on his way to claiming the middleweight gold. The BJJ-brown, who speaks four languages, will be looking to cement his status as a rising MMA prospect with a World Championship title.

De Sousa is the women’s reigning featherweight champion and fights out of Team Bahrain. Born in Rio De Janeiro, Brazil, De Sousa moved to Bahrain to train full-time as a mixed martial artist, and so far, the experience is paying off. The 21-year-old has a 7-0 record, and her team at KHK MMA firmly believes she will eventually be one of the top female fighters in the women’s professional ranks.

Look out for a possible matchup between De Sousa and New Zealand’s Michelle Montague. The New Zealand fighter is the current lightweight world champion but recently moved to featherweight. She and De Sousa fought in the semi-finals at the European Championship, with De Sousa earning the victory. However, Montague was limited in what she could do after injuring her leg in the opening round. A rematch between the two would be one of the most anticipated bouts of the tournament.

The two-time strawweight world champion will be looking to make history this week by becoming the first fighter to capture three world titles. The Kazakhstan mixed martial artist has an 8-0 record and is equipped with an explosive stand-up game. The 25-year-old won the IMMAF 2020 Senior Male Athlete of the Year Award, and after this tournament, will look at moving to the professional ranks.

If you want to follow all the action this week just head over to IMMAF TV to watch the fights live and on replay.