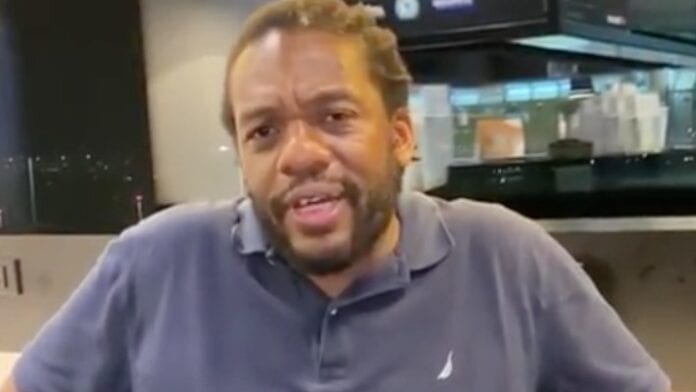 Trinaldo dropped Herbert after the latter fell to the canvas following a delayed response from a strike and was seemingly out. However, Dean let the action continue as Trinaldo — who had stopped fighting — landed a couple more strikes before the fight was eventually stopped.

Hardy was notably animated on commentary as he was shouting for the fight to be stopped and even had some heated words with Dean in the aftermath.

UFC senior vice president David Shaw would later claim the incident would be looked at closely as Hardy would defend his actions following the event.

Dean would defend himself as well in a video posted on his Instagram on Sunday as he believed his stoppage was correct.

He also criticized Hardy for putting on a “Superman shirt” and interfering in what could have had dangerous consequences in another scenario.

“What I really want to get into right now is during the match someone yelled out, ‘Stop the fight,’” Dean said on Instagram (via MMA Junkie). “It’s really interesting because there’s only professionals there and there’s not one fan in the building. Everybody has a job there, everybody knows what their job is and they have specific duties. I have a job to referee the fight, one of my duties is to stop the fight when the fighter’s taking too much damage. There’s two people who are authorized to advise me during that, to maybe yell out those words, ‘Stop the fight.’

“There’s one, the physician. We have a ringside physician who knows more about the physical body than I do. He’s there to give me advice. If he can’t get my attention maybe he might yell, ‘Stop the fight.’ Then there’s the fighter’s corner. They train with them, they know about them, they know more things about him than I do. They may know something I don’t know, so that’s why they would give me some advice to stop the fight. Ultimately to stop the fight is my decision. I don’t know who it was who did it because I was looking at the fight and and I had heard it, so I assumed it was either of the two people authorized to do it, the doctor or the corner.

“After the match I followed up, I asked the physician he said, ‘No, that fight was fine. You were doing perfectly fine with everything you did in that match,’” Dean said. “I didn’t get a chance to ask his corner, but I asked the inspectors, who are in charge of his corner. They said, ‘No. The corner did not yell out to stop the match.’ That means it was someone else, someone else there to do a job. This is a very dangerous thing to do. If you put on your Superman shirt and decide that you’re the smartest person in the room, smarter than the physician, smarter than the corner who works with the guy and smarter than the referee, there’s a chance you could bring in information that could do the fighter a disservice.

“I’m looking at the match, I believe I’m getting information from the people qualified to do it. Under no circumstance would I, even as a referee, get up and yell to another referee to stop the match. If I were to do that I would know there would be a situation where I couldn’t live with myself otherwise. I know there could be consequences that you would never see me in that position again, but I would sleep well knowing that I’d done that.

“The bottom line now if I have to look at that match, not looking at it to know if I should’ve stopped it early, because it’s easy,” Dean said. “Anyone who believes it’s not is just following because someone with a microphone says it should’ve been stopped. But if you know anything about fighting, the fighter got hurt, fighters get rocked all the time, but we’re looking at his actions. He’s tracking his opponent, he knows where his opponent is. He’s putting both arms between him and his opponent, he’s lifting his legs and head off the mat. He’s doing everything I could ask for to stay in that fight. So, it wasn’t a bad stoppage.

“But that person who is yelling out, that’s almost the same thing as if you would grab a horn and ring the horn as if you’re calling the time. It could easily be mistaken for the people who are officially qualified to yell, ‘Stop the fight.’ It should never be done. Food for thought.”

What do you make of Dean’s response?