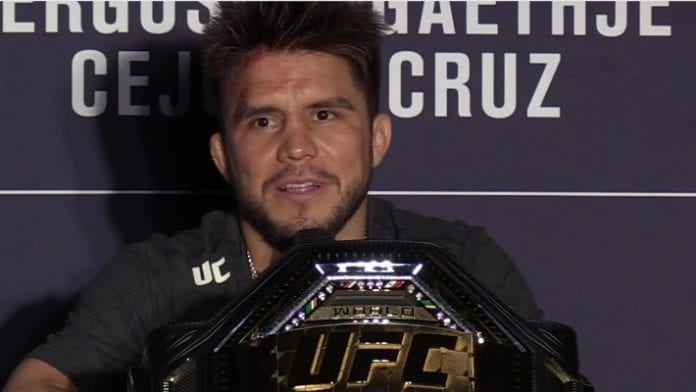 Henry Cejudo is serious about retirement.

After defending his bantamweight title against Dominick Cruz in the co-main event of UFC 249 last night, Cejudo shocked the world by announcing his retirement.

Of course, retirement is never final with most mixed martial arts fighters who hang up their gloves only to return later on. And while money could play a factor, Cejudo appears to be serious about it as he feels he has nothing more to accomplish.

“He [Dana White] knows the number, but let all these other bantamweights kill each other,” Cejudo said at the post-fight press conference (via MMA Fighting). “Let them have fun, if they’re complaining that I’m picking fights.

“You can say whatever the hell you guys want, but I’ve done everything, and I do feel like I should be part of Mt. Rushmore when it comes to combat sports. I do feel like I’m the greatest combat athlete of all time with what I’ve accomplished.”

Cejudo went on to reveal that he had been considering retirement ever since the free time he experienced following his shoulder surgery last year.

And he sees no better time to experience that freedom even more than by leaving the sport on top.

“Man, I love freedom,” he added. “You saw me at a lot of UFC events. I enjoy that stuff. Since I was 11 years old, I probably have about 600 competitions of wrestling matches in my life. That’s all I’ve ever done. I don’t have kids – finally got a girl now. But I want to step into that new chapter of my life. I’ve been extremely selfish, rightfully so, to obtain what I’ve obtained.

“I want to leave on top. I did it in wrestling, and now I want to do it in the sport of MMA. I want to remain king forever.”

Do you think Cejudo will stay retired?