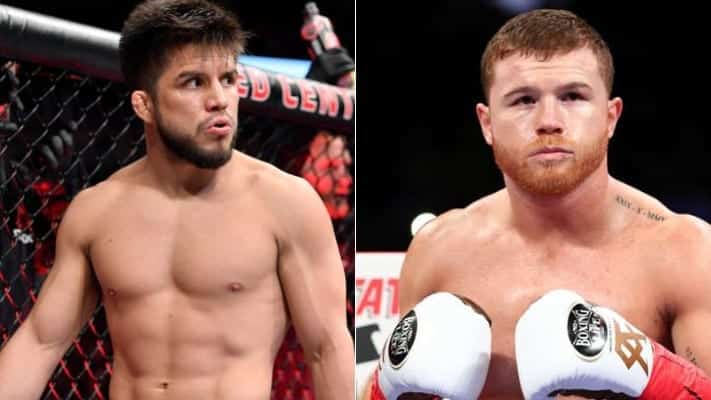 Henry Cejudo wants a boxing match against Ryan Garcia, and he’s letting everyone know about it.

Cejudo surprised many when he retired following his UFC 249 victory over Dominick Cruz. Observers were skeptical it was truly the last time they would see ‘Triple C’ compete, and he has only given them reason to doubt with call-outs of a number of UFC fighters, as well as boxing star Ryan Garcia.

In a new video obtained by EsNews, Cejudo comes face-to-face with one of Garcia’s friends, the legendary Canelo Alvarez.

Cejudo and Alvarez manage to keep things relatively friendly. Though the conversation takes place in Spanish, the cameraman at one point tells Alvarez that Cejudo wants to fight Garcia, to which Canelo responds, “Why not?” Cejudo accuses Alvarez of being nice for the camera before both men go their separate ways. The former UFC flyweight and bantamweight champion turns to the camera and declares, “I’m ready. Someone’s gotta bend the knee to Triple C.”

The 22-year old Garcia is one of the hottest stars in all of boxing. He’s put together a sparkling 21-0 record and recently claimed the interim WBC lightweight title. A fight between he and Cejudo has been rumored as far back as last summer, though it appears no movement has been made on the match-up since then.

Cejudo has announced that his return to competition could be coming soon, though he didn’t say if that would be in the octagon or squared circle. If he does return to the UFC, he would most likely receive an immediate title shot in either the flyweight or bantamweight divisions, given that he ruled over both.

Garcia’s next fight has yet to be announced. Many are holding out hope that it would be against either the legendary Manny Pacquiao or fellow rising star Gervonta Davis.

Canelo Alvarez is coming of a third-round destruction against an over-matched mandatory challenger, Avni Yildirim. With the win, he defended both his WBC and WBZ super-middleweight titles. He will next face-off against Billy Joe Saunders in a highly anticipated bout on May 8.