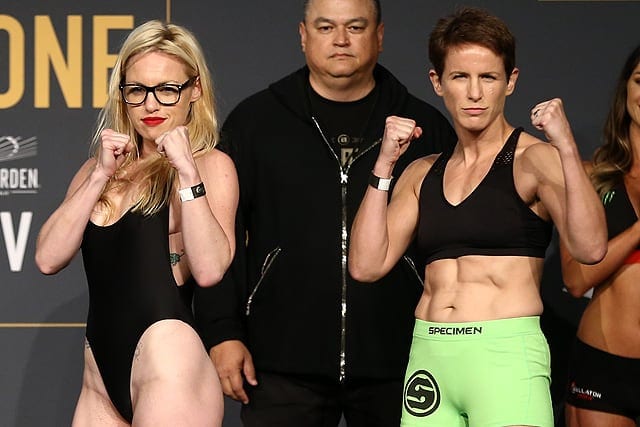 Popular women’s mixed martial artist Heather Hardy is set to return to the Bellator cage, but with a catch that will put her in a position that no other fighter has been in.

Hardy will be fighting Ana Julaton in an MMA bout at Bellator 194 on February 16 and has also agreed to compete against Julaton in a boxing match at a later date.

That would make the two fighters opponents for MMA and boxing simultaneously, which is a first in combat sports.

Hardy made a serious impression on MMA fans in a losing but gutsy effort to Kristina Williams back in October. Hardy displayed ridiculous heart in that fight and has been a fan favorite ever since her promotional debut at Bellator NYC last June.

The 35-year-old was victorious in her MMA and Bellator debut and stands at 1-1 in MMA with a 20-0 record in professional boxing.

Her opponent is also a mixed martial artist who professionally boxes, holding a 14-4-1 boxing record and a 2-3 record in MMA.

Bellator 194 will feature a rematch of Roy “Big Country” Nelson and Matt Mitrione in the Heavyweight Grand Prix. The tournament will kick off this weekend with “Rampage” Jackson facing off against Chael Sonnen in the Bellator 192 headliner.