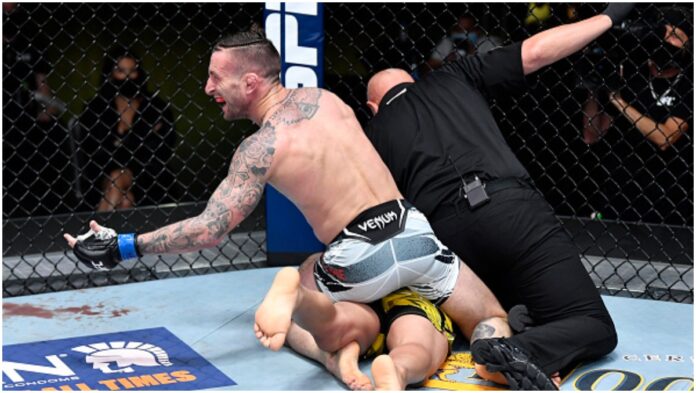 Gregor Gillespie woke up to bad news today, as the UFC removed him from the rankings, causing a rampant rumor that he’d been released.

Taking to Instagram to make a statement, ‘The Gift’ denied the release rumors and addressed his removal from the UFC rankings:

“1) I’m removed from the RANKINGS. Not from the organization. (Fighters are removed from rankings when inactive for a period of time which I’m gathering is 12 months).”

“2) I’m not fucking going ANYWHERE, rankings or not.” He continued before launching into how much he loves the UFC, and despite their bad reputation for low pay, he’d say they’ve always paid him fairly so far.

“I love the UFC, and contrary to what the haters say about them, the UFC has ALWAYS been more than good to me. Pay is great, everything super organized, the follow up after from medical staff is unbelievable, 100% class act top of the food chain.” ‘The Gift’ said.

“It is NOT their fault I have not had a fight. They have offered me plenty of fights in the last year. I have accepted any and all of them against guys who were ranked ahead of me (outside of the VERY short notice ones like 4-8 days), and conversely, I have obviously turned down all of the ones of guys ranked behind me. I am on a mission to fight the top guys w the lowest number next to their name and get towards that belt, and fighting guys who are ranked behind me isn’t the way to do that, but I also understand sitting for a long period of time isn’t either.”

“3) I am and have been patiently waiting for the right fight, one that is going to push me toward the belt,” Gregor Gillespie stated. “Since Ferguson turned it down like 100 fukin times in the last yr, since Mikey Chandler didn’t seem too interested in fighting me when I brought it up, and since RDA just turned down the fight against me (WHICH I ACCEPTED BTW) I guess @beneildariush will have to do. I know you’re banged up and recovering big dawg, so just gimme a 8 week heads up and let’s do the thing.”

“PS … RDA, Chandler, offer always fukin stands … RDA was cool with fighting me on 4 days notice when I was literally on a mountain 7 hours away from home when he needed a last-second replacement, but when just offered fight w me since then where I would have a fight camp, he straight up said no.”

“***Long story short, removed from rankings, not from the UFC,” Gillespie concluded.

What’s Next for Gregor Gillespie?

Gregor Gillespie was one of MMA’s most highly touted prospects before the Kevin Lee knockout in 2019. While still held in high regard, the momentum of Gillespie as an undefeated superstar was officially destroyed by that soul-taking head kick from Lee.

While previously fighting at least twice a year before that, the knockout would cause ‘The Gift’ to take almost a year and a half off before facing Diego Ferreira in what was a close fight, but one that ended favorably for Gillespie as he’d win via ground and pound TKO.

Now, it’s been over a year since that fight. Making Gillespie having fought a single time in an almost two and a half year period.

According to the man himself, an RDA, Beneil Dariush, or Michael Chandler fight seems to be most favorable. But as of now, there’s nothing concrete as to who Gregor Gillespie will face next.

Who do you want to see ‘The Gift’ face next?