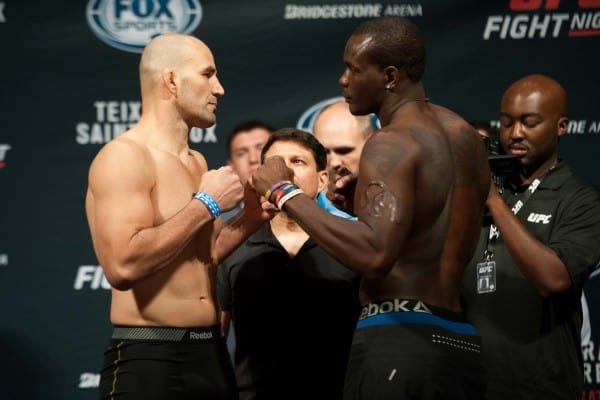 Returning from nearly 10 months off after a disappointing 2014, No. 4-ranked light heavyweight Glover Teixeira instantly put his name back onto the short list of legitimate 205-pound title contenders with a dominant submission win (watch full highlights here) over the formerly surging Ovince St. Preux in the main event of last night’s (Sat., August 8, 2015) UFC Fight Night 73 from the Bridgestone Arena in Nashville, Tennessee.

While that may not be the case in most other divisions in the UFC (except for maybe say, women’s bantamweight), it is at 205, where the absence of dominant champion Jon Jones has caused a drought in the rankings of the once prominent division. Teixeira dropped a five-round bout to Jones, who has still defeated all he has faced, only last year, but now he believes that his name can’t be denied when speaking about the currently shallow landscape.

He proclaimed that he’s back in top contention at the card’s post-fight press conference (quotes via MMAFighting.com):

“With the division the way it is right now, you mention the top contenders you’re gonna have to mention my name,” Teixeira said. “I’m there. We’ll see what the organization does.”

Indeed Teixeira is there after a surprisingly easy win over the No. 6-ranked St. Preux, who brought in the momentum of two impressive knockouts over Mauricio “Shogun” Rua and Patrick Cummins. Unlike his last bout, a lopsided loss to talented wrestler Phil Davis at last October’s UFC 179, the Brazilian showed excellent wrestling and grappling skills in submitting “OSP” last night.

But he elaborated that his loss to Davis wasn’t for a lack of skill, yet rather a tough weight cut that sapped his performance to the point where he wasn’t able to recover:

“I keep making excuses for the last fight, but the thing is the weight cut was horrible,” Teixeira said. … “I believe 50 percent of some fighters wouldn’t fight in the situation I was in last fight. It was a bad feeling. The whole day of recovering was a bad day.”

And even though he had a down year following his five-fight undefeated run to begin his UFC career, Teixeira won’t let that sway him. He’s now back and supposedly in the best shape he’s ever been. Something that he informed St. Preux after their fight last night:

“I have a dream, it’s to be a champion,” Teixeira said. “My dream is not thrown into the water, because I had a little slack. I told OSP today, he fought the best I’ve ever been. I’m not denying that. I’m in the best shape of my life. I felt better in this fight than ever.”

With a big rebound win in a main event bout now in the books, Teixeira is feeling good, back in shape, and in the best division to possibly get another title shot with two to three more big wins. The 35-year-old may be running out of chances, however, so his time to push for one last title run is now.

He shared some what could only be deemed as “respectful” trash talk with divisional champion on FOX Sports 1 last night, and took a somewhat more direct tone at the press conference:

“Cormier, I told you before,” Teixeira said. “I’m coming for you, baby.”