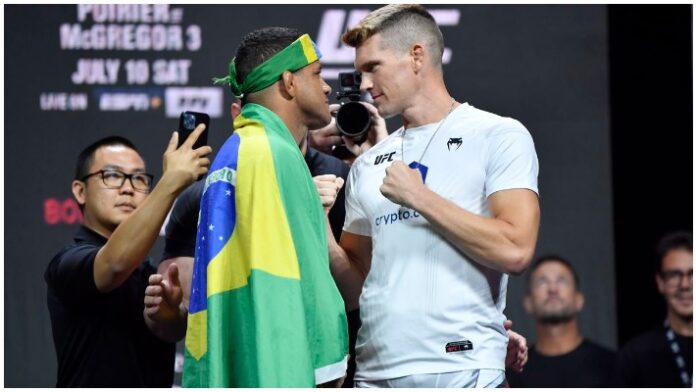 In the UFC 264 co-main event we have an exciting welterweight match-up with title implications. BJJ specialist Gilbert Burns will take on Stephen ‘Wonderboy’ Thompson. Who’ll win? Let’s find out.

Round 1: Stephen Thompson has taken the center early but neither fighter has landed anything through one minute. Gilbert Burns is pushing forward now, he misses with a flurry of strikes. The Brazilian looks to drag this fight to the mat. ‘Wonderboy’ initially defends but Burns continues to pursue the takedown against the fence. It’s something of a stalemate against the fence and the fans are becoming restless. Burns finally gets the fight to the floor with two minutes left in round one. Thompson is scooting back to the fence and manages to get back up to his knees. Burns smashes him with punches as he does so and Thompson stands up to avoid them. Burn maintains control against the fence. All hell breaks loose in the final seconds of the first frame. Burns goes chasing his opponent while throwing big strikes before falling to the floor. Wonderboy tries for a head kick as he stands up before the horn sounds to end round one.

Round 2: Thompson opens up with a solid leg kick. Another quiet first minute though. Every time Burns steps into range Thomspon flicks out a kick to keep him at bay. Burns hasn’t landed anything through the first half of this second round. Thompson spins and partially lands. The kick seems to have shocked Burns into life. He swarms and lands a big shot of his own. Another big leg kick from Thompson. Burns returns. Wonderboy leaps in with a punch, Burns ducks under for the takedown but is shrugged off. Burns scores with a low kick and overhand. He shoots and scores with a takedown. The Brazilian has his opponent pressed against the fence and is tapping away with ground strikes. Wonderboy returns and they swing to the end of round two.

Round 3: Thompson lands a glancing head kick at the start of the final frame. He follows up with a straight right. Burns is beckoning him in. Wonderboy accepts and is starting to let his punches fly. He spins and lands with a kick that appears to rock Burns. Both men start swinging wildly. Burns does well to tie up and force this fight to the fence. He pulls his opponent to the mat and lands in side control. Burns seems content to hold position and throw the odd shot to avoid the referee standing them up. Thompson is trying to work his way back up but Burns ain’t having it. He continues to hammer away with shots. Wonderboy has his back against the fence but is forced to give up on his attempt as Burns locks up a choke. The fight ended with Burns hammering away with big (mostly illegal) shots the back of his opponent’s head.