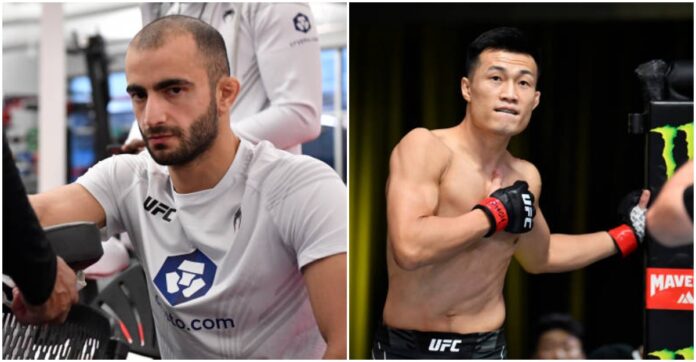 Giga Chikadze was extremely professional and respectful following the beatdown he received from Calvin Kattar in the UFC’s first main event of the year. However, the Georgian didn’t keep that same energy when it came to addressing one man.

Last night UFC fans saw Chikadze’s dominant run of nine straight victories come to an end when he suffered a vicious loss to the always entertaining Calvin Kattar. Kattar, who ironically was coming of a brutal loss himself precisely one year ago to Max Holloway, did the same to Chikadze, leaving him cut open and a bloodied mess.

Leading into the fight, If victorious against Kattar, Chikadze was eyeing a fight with current featherweight champion Alexander Volkanovski after Max Holloway’s withdrawal from injury, which aggravated “Ninja” even more at the fact Jung was dealt the opportunity to fight for gold, and not him. The setback Chikadze suffered rules the thirty-three-year-old out of title talks for now.

Chikadze wasn’t the happiest of men once “The Korean Zombie” was announced as the next challenger for Alexander Volkanovski and took some sly digs calling him “easy task” for the champion. As expected, Jung fired back on Twitter following Chikadze’s performance.

The Korean Zombie Gives His Thoughts on Giga Chikadze’s Performance

Chikadze humbly accepted the defeat showcasing his respect for Calvin Kattar after posing in a photo with one another at the hospital after going to war. Chikadze then took to his Instagram story to give his view on the fight. The Kings MMA fighter seemed in good spirits, promising to come back stronger, but bit back at Jung’s tweet.

“Thank you my real supporters!I love you all & I owe you speed come back,” Chikadze wrote. Lot of fake people around, but its okay! Also fuck you Korean Zombie! Be happy with someone’s lose you cheap fuck @koreanzombiemma”

After such a one-sided defeat and the damage Chikadze absorbed, I think it’s fair to say it’ll be a minute until we see him back in the Octagon. In the meantime, it allows the featherweight championship fight between Volkanovksi and Jung to play out.

What’s next for Giga Chikadze?