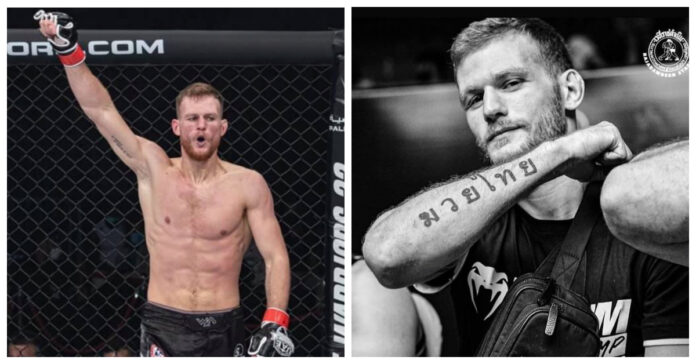 A French Muay Thai champion uploaded a photo of the Thai language tattoo only to get mocked by the audience online.

The story was picked up by international media after Twitter had a field day ridiculing the French athlete, as noted by ASEAN NOW. People weighed in with their thoughts on a seemingly innocuous mistake.

One joked “Oh My Buddha!” with a shocked emoji face.

Reigning Middleweight Superkombat Champion Jimmy Vienot, proudly showed off the tattoo on his forearm with what he intended to say ‘Muay Thai’ or ‘Thai Boxing’. In Thai script, this is written มวย ไทย but many online who can read the Thai language pointed out that the first letter was not ม (an M sound) but a similar ฆ – kh sound.

This would make the tattoo say “Khuay Thai”, which carries a much more negative meaning than the French Muay Thai champion was going for. It translates to penis alongside the word Thai, making it mean ‘Thai d*ck’.

Many Thais reported having looked twice at the first letter to confirm what they were reading as they expected it to have an M sound. While it may not have been his intention, it certainly looked a tad bit suspicious although the Thai word for ‘d*ck’ is usually spelled with a different ‘kh’ letter namely ค.

Thai media does not traditionally print the word as is and usually conforms to publishing it in the following manner: ค_ย. While one can argue against the confusion or for it, there are elements that distort the meaning of the first letter such as the first loop being filled in.

French Muay Thai champion Vienot is also only the fourth non-Thai to win the Lumpinee Stadium title in 2019 according to a report on the story in the UK’s Mirror tabloid.

Do you think the tattoo means what the French Muay Thai champion wanted it to?