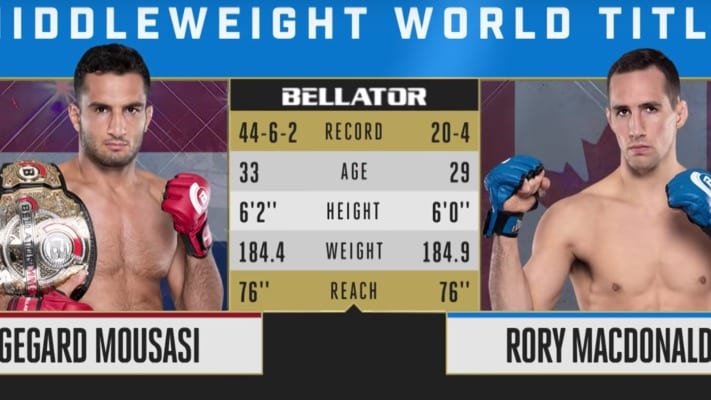 As quarantine continues for most of the world, Bellator MMA has started releasing full fights including the middleweight title fight between Gegard Mousasi and Rory MacDonald.

Back when both fighters were champions, MacDonald — the welterweight king at the time — moved up to challenge Mousasi for his crown in the Bellator 206 headliner in September 2018. If the Canadian had emerged victorious, he would have become the promotion’s first-ever two-weight champion.

However, Mousasi proved to be too big and experienced for the “Red King” as he finished him with brutal ground and pound in the second round of their title contest.

You can watch it below courtesy of the Bellator MMA YouTube channel:

Mousasi would later lose his middleweight title to Rafael Lovato Jr. while MacDonald would get outpointed by Douglas Lima to be unseated as welterweight champion. With Lovato recently stepping away from the sport, Mousasi is now set to face Lima for the vacant title.

Meanwhile, MacDonald departed the promotion late last year and is set to make his PFL debut later this year.

Looking back at the fight, what do you make of it now? Should MacDonald have never been in the cage with Mousasi in the first place?