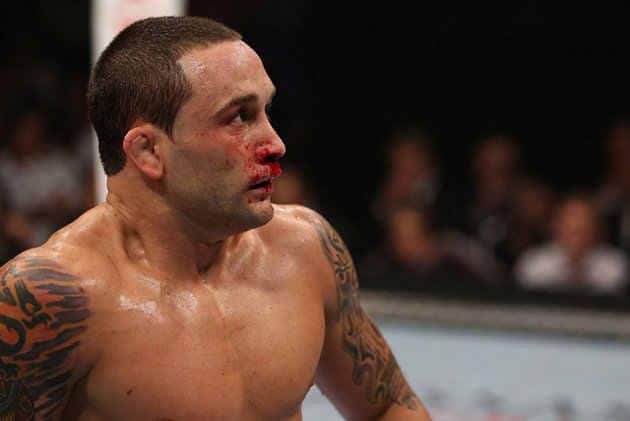 UFC featherweight contender and former lightweight champion Frankie Edgar is once again being overlooked in the title race. With the news that Jose Aldo is questionable for the UFC 189 title fight with Conor McGregor, many expected ‘The Answer’ to get the call. His four-fight win streak at 145 pounds was apparently not enough when considering the stand-in for the potentially Absent ‘Scarface’, Chad Mendes got the nod, and the sudden change in rankings only made the whole scenario more confusing.

So what does Edgar think of being looked past again? Talking to The MMA Hour, ‘The Answer’ does not seem too happy:

“I was a little surprised by it. Somebody called and asked if I was willing to step in, so I almost wish they didn’t ask me at all, get my hopes up for nothing.”

“Not taking anything away from Mendes, obviously he’s a stud and he goes in there, he won his last fight by knockout. But you know, his last two fights he’s 1-1. He has only a one-fight win streak. I have a four-fight win streak. So yeah, I am a little surprised. I think at one point after the Cub (Swanson) fight, or at some point, I was the No. 1 contender. I think it was after [Mendes’] fight with Aldo actually, I was the No. 1 contender. Then all of a sudden, somehow it got flopped.”

With the rankings already well known as pretty much pointless, it’s surprising to learn that was the sole reason in the UFC’s thought process. Mendes is indeed coming off a big finish of Ricardo Lamas, but is only one win removed from his UFC 179 title loss against ‘Scarface’. Edgar continued:

“They pretty much said, Mendes is the No. 1 contender*,” Edgar said. “I guess they’re going by numbers, but… I’m trying not to put my foot in my mouth here, but you gotta go by the rankings all the time, not just sometimes.

“I understand it’s a business and that’s what they’re looking for,” Edgar added. “But in this instance, I felt like, alright, if he’s No. 1, I’m No. 2, it’s a fine line right there. But they went with him, they didn’t go with me, I can’t be crying about it right now.”

So what are the options for Edgar right now? Obviously waiting around for the eventual clear title fight is one door, but behind door number two is the choice to fight again. This, of course, is all dependant on the status of the Nova Uniao featherweight boss come July 11th. In the mind of ‘The Answer’, there is only one option:

“(I’m) definitely annoyed. But again, I’m not one to sit there and (complain). The decision is made. I’ve gotta keep moving and worry about what’s next. There’s a lot of ‘ifs’ in the air right now. I think July 11th we’ll figure out what’s really going on and I guess that’ll my be future.”

So there you have it, we only know right now that Conor McGregor will fight at UFC 189. The champion is uncertain, Chad Mendes is the replacement if Junior bails, but surely Frankie Edgar should have been top of the stack, what gives?

*Interview before the rankings update