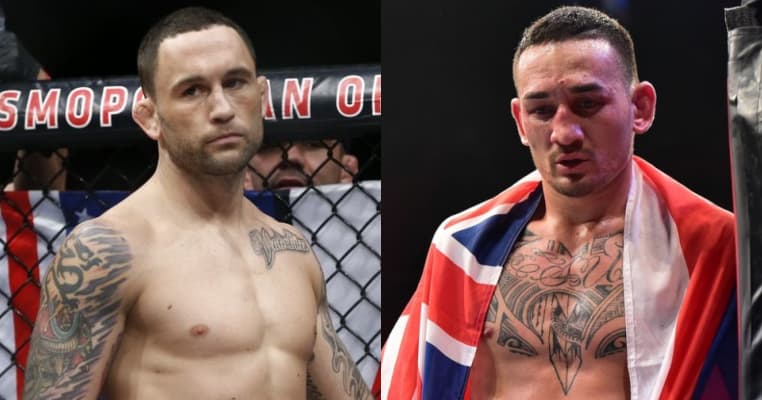 Max Holloway became the undisputed UFC featherweight champion this past weekend (June 3, 2017) after knocking out Jose Aldo in the main event of UFC 212 from Rio de Janeiro. Now just days removed from his title winning performance, “Blessed” already has a few challengers chomping at the bit to face him, most notably Frankie Edgar and Cub Swanson.

Swanson, who was submitted by both Holloway and Edgar in 2014 and 2015, has compiled four consecutive victories and recently campaigned for a title shot that has eluded him throughout his career.

Edgar, however, has won back-to-back fights over Jeremy Stepehens and Yair Rodriguez after losing to Aldo for a second time last summer and feels as if the fight to make is him vs. Holloway:

“The cards fell in my favor, so here we go, let’s set up Holloway vs. Edgar,” Edgar said on a recent appearance on “The MMA Hour.”

Edgar admitted that nothing is official as of yet, although he feels as if there’s ‘no one that makes more sense’ than himself to be the next 145-pound title challenger:

“Not officially, you see everything is trending that way it seems like, but nothing official,” Edgar said. “There’s no one that makes more sense than me and no one that’s done what they’ve done like what I’ve done to get it.”

As far as Swanson, who’s currently ranked No. 4 in the division, goes, Edgar simply doesn’t see how he’s in contention for a title shot:

“I just don’t see how he’s in consideration,” Edgar said. “Since me and Cub fought, I’ve fought nothing but Top 10, Top 5 guys and I don’t think he’s fought anybody in the Top 10 … and he’s also lost to Max. So I don’t see how that’s even a thing to even compare to. Cub’s a great fighter, but this is how it goes and you have to put yourself on the line every time … and I do that.”

Who would you like to see Holloway make the first defense of his title against?