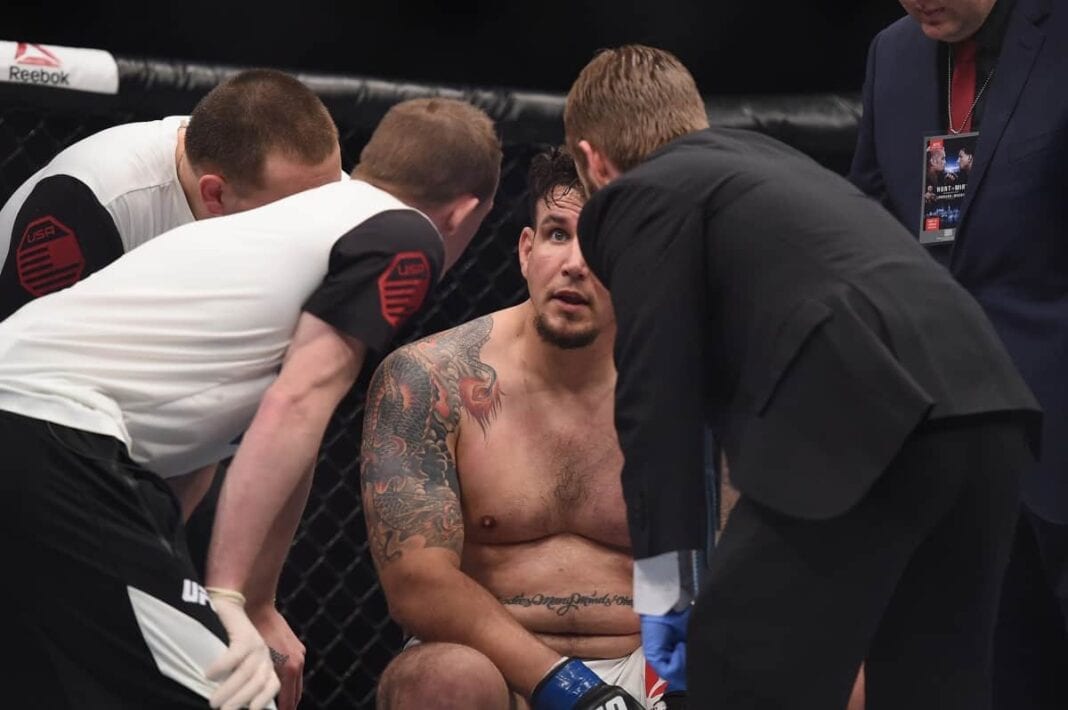 Another day, another fighter flagged for a potential violation of the UFC’s new and increased drug testing program led by the United States Anti-Doping Agency (USADA).

Word came tonight (Fri., April 8, 2015) that two-time former UFC heavyweight Frank Mir was notified of a potential anti-doping violation stemming from his knockout loss to Mark Hunt in the main event of UFC Fight Night 85 on March 20, 2016 from Brisbane, Australia.

The UFC released the following statement via its website:

The UFC organization was notified today that the U.S. Anti-Doping Agency (USADA) has informed Frank Mir of a potential Anti-Doping Policy violation stemming from an in-competition sample collected the day of his fight on March 20, 2016 in Brisbane, Australia.

Additional information will be provided at the appropriate time as the process moves forward.

Exactly which banned substance Mir potentially tested positive for has not been made public at this time. He will of course have an opportunity to appeal the violation and any subsequent punishment.

It appears that Mir fully plans to do just that, as he released a post on his Facebook page proclaiming the he did not take the substance he has been accused of testing positive for or any other performance-enhancing drugs:

To all my fans and supporters,
I recently have been notified by usada that the test I took on the night of the fight came back positive for a substance that I did not take. I don’t know how that is possible as I did not take any performance enhancing drugs (PEDs) to compete. I have never tested positive for a banned substance since joining the UFC and becoming a 2x champion. I ask all of you to hold judgement against me until all the facts have been revealed.

If he does receive a lengthy suspension, however, it could spell the end of an extremely decorated run for Mir, who has lost six out of his last eight UFC fights after ‘The Super Samoan’ knocked him out in the first round in Brisbane. Mir had previously lost four straight in early 2014, but rebounded after a yearlong layoff to top Antonio “Bigfoot” Silva and Todd Duffee to resurrect his career.

Two consecutive losses and the potential violation have seemingly put at least a temporary halt to that. If Mir does indeed decide to hang up his gloves, he’ll retire as arguably the most decorated heavyweight in UFC history, owning the division records for most wins, most fights, and most finishes.