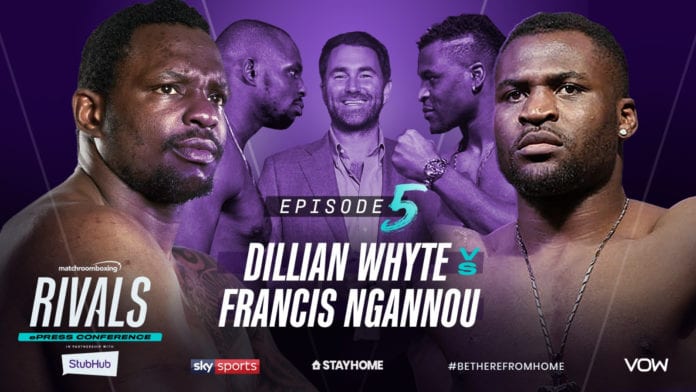 If you found yourself craving another MMA vs. Boxing bout, only this time with heavier shots and a greater chance of seeing a knockout, then today’s news will be right up your alley.

It has been announced that the UFC’s Francis Ngannou and Interim WBC Heavyweight World Champion Dillian Whyte will take part in an online press conference tomorrow hosted by Matchroom Boxing’s Eddie Hearn.

Hearn has said that he is planning on holding talks with Dana White about the possibility of the two heavy-hitters squaring off in the latter half of 2020.

“Dana loves great fights, so I’ll try to make this happen. This isn’t a gimmick; this is two of the best and baddest in the world. Whyte vs. Ngannou would be huge,” Hearn exclaimed.

It’s a fight that will raise eyebrows, but if it does take place, it can also expect to generate a lot of attention. White is not a huge fan of way boxing is run, but he has always spoken favorably in regards to Hearn. It does not seem beyond the realms of possibility that a deal gets worked out between White and Hearn, especially as both fighters are keen to make it happen.

“People have been talking about this potential fight for months now, “Ngannou said.

“This makes sense down the line, me and Dillian are going to cross paths. I don’t back down from a challenge.”

At the moment, there has been no mention of what ruleset any potential bout would be fought under, but Whyte seems open to stepping inside the cage.

“We can do two fights, one in the ring and one in the cage,” said the British boxer.

“We’ve both got power, we’re both in our prime, and one punch can end it. I want to get it on and rock the world.”

Is this a fight you would like to see happen?