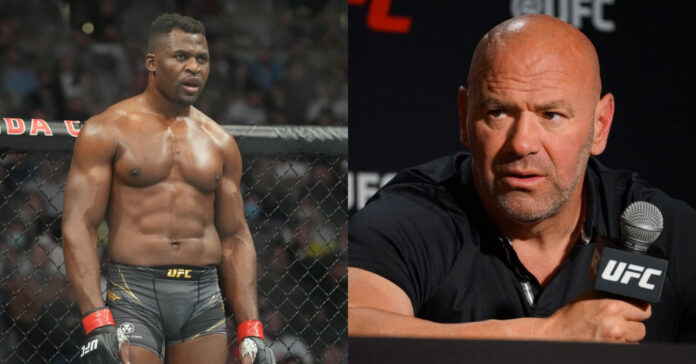 Francis Ngannou has revealed that he lost out on major bucks from a potential sponsor.

The reigning UFC heavyweight champion has been on the sidelines following his most recent outing against Ciryl Gane in Jan. at UFC 270. After adding a successful title defense against the rising striker, Ngannou chose to undergo knee surgery and was expected to be out of competition for the rest of the year.

Taking to Twitter, Ngannou expressed his frustrations of losing $1 million in sponsorship money due to the UFC prohibiting fighters from being sponsored at their official events including fights.

“Fighters are ripped off with Sponsorship,” he wrote. “It’s a huge source of revenue for us but the company keeps exploiting that for their own benefit.”

He followed up with another message suggesting the allowance of at least two sponsors inside the cage for each athlete: “I understand that the sport needs to look good with uniforms but we should at least have a right for a minimum of 2 approved sponsors for in the octagon.”

“The Predator” talked about losing a crypto sponsor because of the promotion’s partnership with Crypto.com, a deal the champion got nothing out of personally.

“Last year I lost a deal of over a million dollars from a crypto exchange because the partnership with CRYPTO .COM What do I got from it ?”

He ended the series of tweets with a sly dig at the company.

Francis Ngannou has been at odds with the UFC and company president Dana White over pay issues. He took a big risk in competing against Gane as it was the last fight on his current deal. A loss would have taken away all the power from Ngannou in negotiating a better deal on his own terms. With the gold in his hand, his deal automatically extended for one more year after which he would be at liberty to leave the organization or re-sign holding leverage in the discussions.

Do you want to see Francis Ngannou transition to boxing or stay with the UFC?