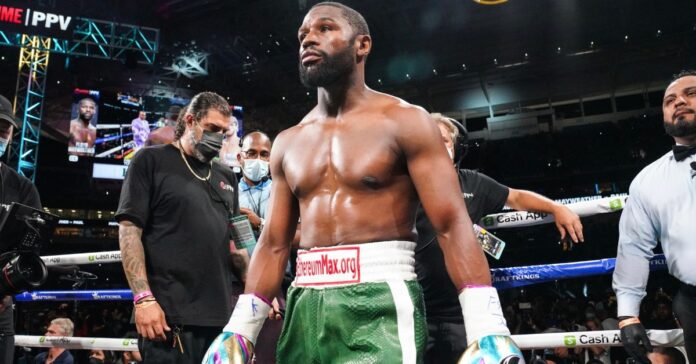 Former professional boxing world champion, Floyd Mayweather is slated to return to the squared circle for the second time this year as part of another exhibition – with the Missouri native set to feature at a Rizin FF event in Japan in December of this year – as per an official press released provided this Saturday afternoon.

Floyd Mayweather, 45, retired from professional boxing back in 2017 following a tenth round knockout win over former undisputed UFC lightweight and featherweight champion, Conor McGregor – improving his undefeated professional record to 50-0.

In the time since his retirement, however, Mayweather has featured in three exhibition matchups – the most recent of which in Abu Dhabi, UAE in May where he fought over the course of eight round against Don Moore on Yas Island.

In August of last year, Floyd Mayweather met with YouTuber and podcast host, Logan Paul at the Hard Rock Stadium in Florida – once more fighting over the course of eight rounds against the Ohio native with an official result undisclosed.

Back in 2018 under the Rizin FF banner, Mayweather fought kickboxing talent, Tenshin Nasukawa in a lucrative boxing match on New Year’s Eve – defeating the 23-year-old Japan native with a first round knockout.

With an opponent for Mayweather’s next boxing venture set to be announced next week, the Grand Rapids veteran has been linked to some notable, high-profile matchups in recent weeks.

One potential opponent who seems to be off the cards, however, is the undefeated Jake Paul – who confirmed last night that he would return to professional boxing for his sixth fight on August 6. at Madison Square Garden – in tandem with decorated puncher, Amanda Serrano on the same headlining doubleheader.

Last year, Floyd Mayweather was officially inducted into the International Boxing Hall of Fame as part of the class of 2021.