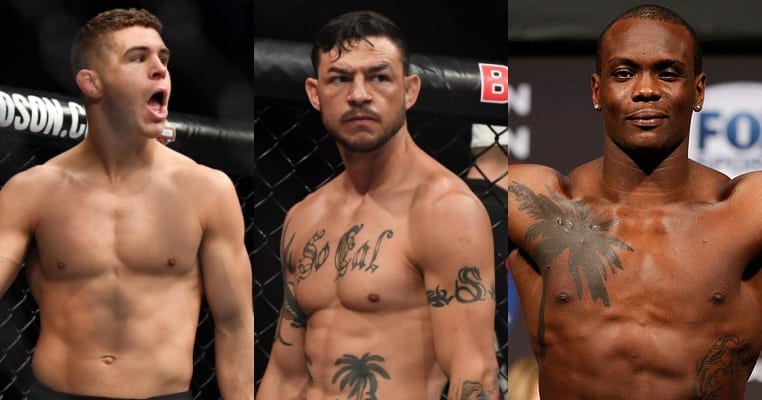 UFC Fight Night 108 went down live last night (Sat., April 22, 2017) on FOX Sports 1 from Nashville, Tennessee, and although it was somewhat overlooked, it turned out to be an incredible card that displayed some of the best mixed martial arts (MMA) action we’ve seen all year.

The main event featured a featherweight bout between surging contender Cub Swanson and Artem Lobov, while the co-main event played host to a lightweight clash between the returning Al Iaquinta and veteran Diego Sanchez. The rest of the card produced a vast amount of exciting action as well.

With the UFC experiencing a slow start to the year, UFC Fight Night 108 followed last week’s strong UFC on FOX 24 card and offered a change of pace for fight fans. Let’s take a look at five reasons why it just may have been the best card of 2017 thus far:

25-year-old welterweight prospect Mike Perry entered UFC Fight Night 108 coming off of a decision loss to Alan Jouban this past December, but he was able to rebound in emphatic fashion, scoring an absolutely brutal knockout victory over longtime veteran Jake Ellenberger.

After dropping “The Juggernaut” with a riveting left hand, Perry was able to land a vicious elbow off of a break to floor Ellenberger in the second round of their fight.

“Platinum” will certainly continue to rise up the welterweight rankings after scoring what will likely end up as a “Knockout of the Year” nominee.

Scottish 27-year-old Stevie Ray faced a stiff test on the main card of UFC Fight Night 108 last night when he took on gritty veteran Joe Lauzon, who happens to be one the best submission artists in the history of the 155-pound division.

In fact, Lauzon was able to control and dominate Ray early on, but Ray showed a terrific display of heart as he battled back to score an impressive decision victory. Avoiding Lauzon’s submission attempts. Ray landed 109 significant strikes and 139 total strikes. He doubled Lauzon in both of these categories.

It’s a display of determination and heart like this that makes fighting a joy to watch and Ray will certainly benefit from the victory.

Coming off of three consecutive losses to Jon Jones, Jimi Manuwa and Volkan Oezdemir, Saint Preux was in desperate need of a victory and was able to get it while making quite the statement in the process. The former collegiate football player was able to set a record with his second Von Flue choke submission in the second round, and he became the first fighter in promotional history with two victories by way of the rarely-seen submission. His first Von Flue choke victory came against Nikita Krylov at UFC 171 in 2014.

It’s not everyday that you see a Von Flue choke finish in MMA and we don’t always see records being set either, which is why OSP’s victory only added to the amazing – and fully justified – excitement at UFC Fight Night 108.

Prior to UFC Fight Night 108, “Ragin’” Al Iaquinta hadn’t fought in over two years, with his last appearance coming in April 2015 when he scored a split decision victory over Jorge Masvidal. The Long Island native was scheduled to fight at UFC 205 last November in New York City, but contract negotiations continued to keep him out of the Octagon.

Last night, however, Iaquinta returned to action in the co-main event against longtime veteran and former The Ultimate Fighter (TUF) winner Diego Sanchez. Sanchez proved to be no match for the returning Iaquinta, however, as “Raging” Al looked like he never lost a step, drilling Sanchez with a powerful right hand in the opening round to finish off Sanchez.

Iaquinta produced an explosive knockout that paved a path for the awesome main event, which is our final reason why UFC Fight Night 108 was the best card of 2017…

In the build-up to UFC Fight Night 108, many were criticizing the UFC for booking an unranked fighter like Lobov against a high-level, proven contender like Swanson. The fight, however, turned out to be an exciting affair.

“The Russian Hammer” actually won the first round and showed grit and toughness throughout the bout, but Swanson ended up pulling away as the fight went on. “Killer Cub” hit and rocked Lobov on multiple occasions with an amazing variety of strikes, which provided great entertainment from a bout that was being heavily overlooked. Swanson ended up winning a decision after five grueling rounds to top off a terrific card.

So the UFC started off 2017 extremely slow, but momentum has begun to pick up in a big way with two amazing events in seven days. Do you think UFC Fight Night 108 was the best card of 2017 thus far?