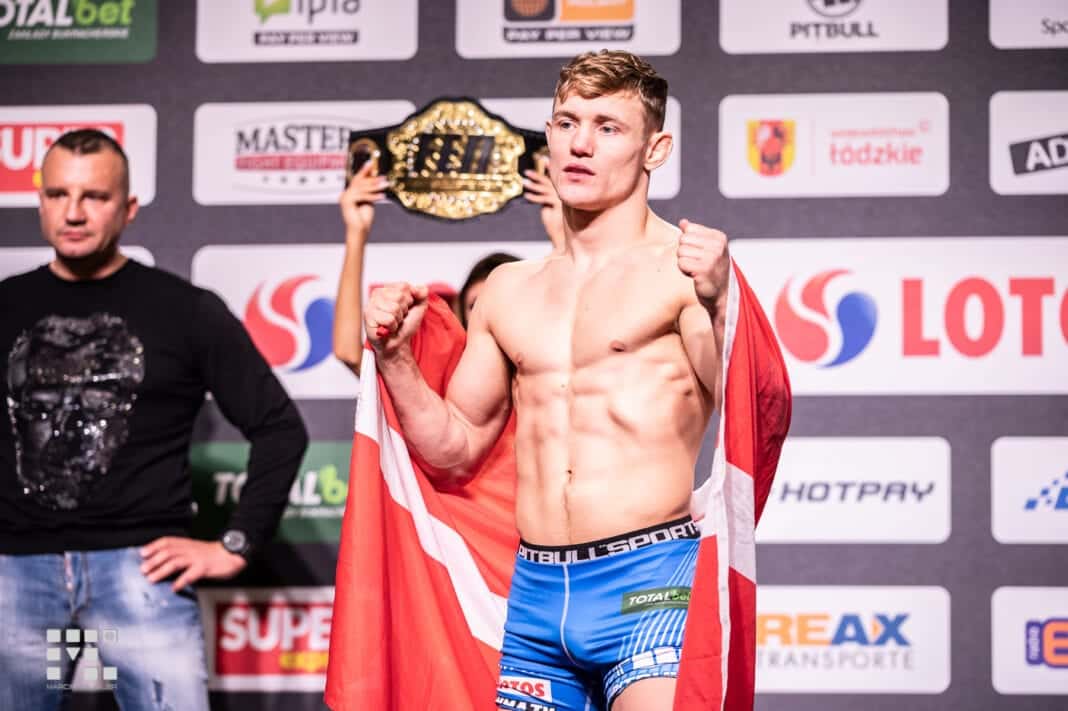 This Friday at FEN 34, Denmark’s Jonas “Shark” Magard returns to the cage to defend his FEN Bantamweight Championship against Ireland’s Frans Mlambo. The 28-year-old claimed the vacant title last November, at FEN 31, after defeating Poland’s Sebastian Romanowski via unanimous decision.

It was an impressive performance from the Dane and helped cement his reputation as one of Europe’s top bantamweight talents. A dynamic athlete with an imposing ground game, Magard looks to be entering his prime and comes into this week’s bout riding a four-fight win streak. The six-month break between fights means that fans will get to witness a fighter at the top of their game.

” It thinks it is perfect for me. It’s a five-round fight, so after a fight like that [Romanowski], the preparation for a title fight, you need to get a bit of time for yourself and your body to come back from that, so I think it is the perfect timing for a fight like this now,” Magard speaking to Lowkick MMA.

In Mlambo, Magard will face a seasoned veteran, coming off a recent win at Bellator Milan over Cory Tait. The South African-born fighter, who trains out of SBG Ireland, is a gifted striker, who will be looking to make a statement when he makes his promotional debut at FEN 34.

Mlambo, a 2015 IMMAF Featherweight World Champion, has fought for multiple promotions and had an impressive run with BRAVE CF. He has been a regular sparring partner for Conor McGregor, and the “Black Mamba’s” speed will provide Magard with a different type of challenge than the one Romanowski presented.

“He has been in a lot of promotions and has shown a lot of good skills, he is a good guy, and it is a fight I want. Stylistically I think we will be a good match for each other it is going to a good fight. I am very much looking forward to it,” Magard said.

” I think me and Frans’ fight is going to be one of the best matches on the Polish scene in a long time, seeing from where we are standing, both of us, and our careers right now.”

There is a lot on the line for both men, and Magard is doing everything within his power to ensure that when the cage doors shut, he is fully prepared for whatever Mlambo throws at him. To that end, Magard, who does his regular training at Redline Training Center in Sweden, has spent the final weeks of his camp in Manchester, England, sharpening his tools at Manchester Top Team.

” The game plans change from opponent to opponent. There have been some specific things we have been working on for this fight. I traveled to England to get the best training and the best sparring I could get for this fight camp, ” he commented.

“It is very good, very, very tough. The level here is very high. The striking skills, the ground skills are next level over here. I have been coming back and forth to Manchester for quite some time now. The skill level has risen like crazy since I was here last time.”

The fact that the matchup between Magard and Mlambo is being put on in Poland by a Polish promoter demonstrates MMA’s expanding appeal in the country. FEN has made no secret of its aim to broaden its reach to fans outside of Poland, and this week’s bantamweight title bout is proof of their commitment to that aim.

“I don’t think people understand how big MMA is in Poland; it is almost becoming like a national sport for them. The events are crazy. They are very good, very professional events, and the whole setup is very nice to look at as well,” Magard said.

“I think they have one of the best scenes in Europe and just a love for the sport over there. You don’t see it anywhere else. They are really taking it in.”

A win at FEN 34 will open even more doors for Magard regarding possible future opponents. However, at the moment, the “Shark’s” focus is solely on the task at hand.

” I just take one fight at a time,” he said when asked about what the future could hold.

” I will sit down with my team and discuss all these things, but right now, the focus is on the fight, one thing at a time.”

If you are keen to follow the action at FEN 34, you can purchase the PPV at FEN MMA TV.