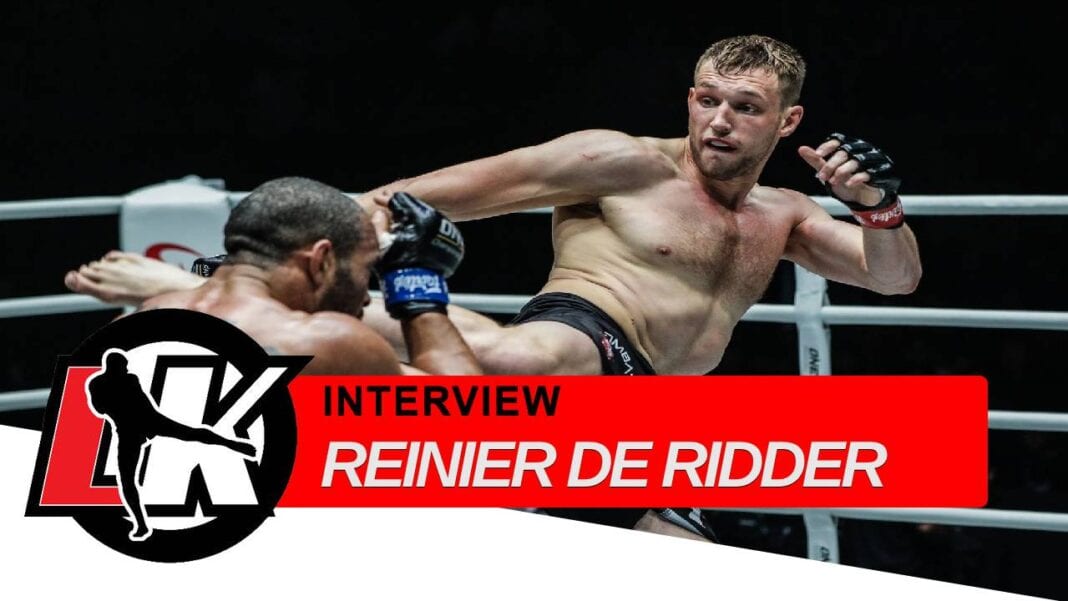 ONE Championship middleweight Reinier De Ridder will finally get his shot at the title this October, when he takes on defending champion Aung La N Sang at ONE: Inside The Matrix. The undefeated Dutchman has begun training for the clash and is not leaving anything to chance as he prepares himself for the biggest fight of his career.

“It’s different. It’s definitely different; it feels like I am letting the animal out again,” de Ridder said, speaking to LowkickMMA about his preparation.

“In training, I can really let go now. I can really let everything out. In fighting, it’s a weird balance between being just a normal guy, with your family and living and loving and then the side of you that has to come out and perform in the gym, and especially in the cage, it’s a crazy balance. I need a fight lined up to let the animal come out, to give everything to go 100 percent to let that side of my personality come out.”

The thirty-year-old is well aware of what Aung La will bring to the table when the two meet on Fri. October 30,in Singapore. The Myanmar fighter is currently living in Florida, training at Sanford MMA alongside UFC welterweight champion Kamaru Usman. De Ridder knows he will be facing a fighter who will be well-drilled and ready come fight night, but he is not expecting to see anything radically different from his opponent.

” He’s a great fighter, and he’s very strong, and he’s very special, but the technique and way he moves is not the most special. It’s not very different from anyone else, and me being from Holland, being from a kickboxing city, it’s very easy to get guys like him in the gym.”

One of the aces that de Ridder has is his sparring partner, Bellator‘s Gegard Mousasi, who is one of the sports top strikers.

” My main guy is always Gegard Mousasi. There is no striker like Gegard. There is nobody that can match up with him. He’s so fast; he’s so technical, he’s so precise,” de Ridder exclaimed.

If he gets the victory over his opponent, de Ridder expects it to be only the first chapter in his rivalry with Aung La, who also holds the ONE light heavyweight crown.

“One thing is for sure. I am going to have to fight Aung La again. That happens at middle or light heavy that is fine with me, but I would really like it if we could arrange for it to happen in Holland,” he exclaimed.

” ONE has been talking about it, this year and the end of last year they talked about it, that, that’s the plan. We have a lot of Dutch kickboxers in ONE right now. We have Regian Eersel, and [Ilias] Ennahachi, and both are champions. We have a lot of top-level guys who are not yet the champion. So I think they could put a great Dutch card together. So that’s the hope, that would be amazing.”

If de Ridder can get the job done, this October, then a ONE Championship card in Holland would become that much more of a possibility.