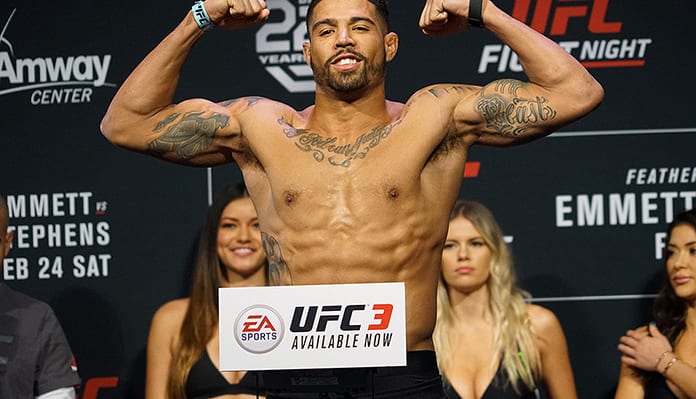 Welterweight Max Griffin is gearing up for the biggest fight of his career this weekend when he takes on Thiago Alves at UFC on ESPN+ 2.

Sacramento’s Griffin will be making his sixth appearance inside the Octagon come Saturday night. Since joining the promotion back in August of 2016, Griffin has competed against some of the very best in the sport.

Although Max “Pain” has shared the Octagon with some well known fighters, he believes Alves holds the title of legend. And for that, Griffin is beyond excited for.

“To me, he [Alves] is on the level of Carlos Condit, Donald Cerrone, he is one of these old pioneers that I used to watch hardcore. He used to be my favorite fighter so its gonna be an honor to go against him,” he added.”

Alves is definitely a time-tested veteran. He has been fighting at the top levels of MMA for a very long time. However, Griffin does not share that same opinion about his last opponent, Curtis Millender.

“I learned a lot from that fight,” said Griffin when asked about what he took away from the Millender fight. “I watched it [the fight], it was close as sh*t. It was close, on the stats I beat him, if you look at the stats I think I had like 68 significant strikes and he had like 17.

“But he stole rounds,” Griffin continued. “He [Millender] is not a finisher, he may have finished guys but to me, he doesn’t fight like a finisher. He just likes to sit in there and wait to the end of a round and throw a flurry and try to win the round. All he is doing is mentally trying to win rounds.”

Max “Pain” may not be sold on Millender’s finishing ability, but there is no denying the primal rage that courses through Thiago Alves’ veins when “The Pitbull” smells blood.

Griffin insists he has never felt better and that he has a few things in store for the former title challenger.

“I got something for him, this is the best I’ve ever felt,” Griffin said. “I’m getting wiser and better, just how my body is performing. I’m doing a lot of mobility stuff now. I’ve always been so tight, I haven’t really been flowing or flexible. I stretch for an hour a day now. I’m just working on being more mobile, because if I’m mobile then I’m that much better.

“I’ve also been reading a sh*t ton,” added Max. “I’m getting my mind on a whole nother level. I’m just so happy it’s all coming together.”

Griffin will be fighting Alves on the prelim portion of this weekend’s UFC on ESPN+ 2 card in Fortaleza, Brazil.