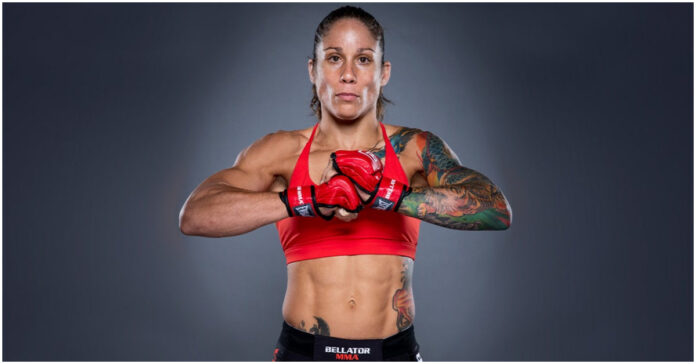 Liz Carmouche is eyeing double champ status in Bellator ahead of her upcoming flyweight title bout with Juliana Velasquez.

A pioneer of women’s MMA, Liz Carmouche has been in the mix at the very top ever since women began competing in the sport. ‘The Girl-rilla’ is getting ready to face undefeated flyweight champion, Juliana Velasquez, at Bellator 278 this April 22. Carmouche has great momentum in her favour, is on a three-fight win streak, and coming off an impressive first-round knockout win over the formerly undefeated Kana Watanabe.

Ahead of the headlining title bout at Bellator 278, Liz Carmouche spoke to LowKickMMA about her ambitions for attaining double champ status and bringing Bellator to Okinawa, Japan where she grew up.

Talking about her plans if she wins the title, Liz Carmouche said.

“I love the idea of, instead of rematches, trying to take on somebody else. Winning that belt, I’d like to, hopefully, if Bellator and COVID would allow, I’d like to go to another country and have an opportunity to see somewhere different. And to compete against a different opponent.

“One of the things that I really want to be able to do in Bellator with the belt is two things, I want to open up the 135 division by first taking the 125 belt. And then after that, I want to take Bellator to Japan and fight in either mainland Japan or Okinawa.”

Liz Carmouche is no longer at San Diego Combat Acamedy

Liz Carmouche has spent a good chunk of her career training at the San Diego Combat Academy with fellow BJJ specialist Ilima-Lei Macfarlane. She revealed that she’s no longer training there as she’s looking to spend more time with her family.

“Now I’m no longer involved with any gym whatsoever besides my own personal training,” said Carmouche before adding where she trains now, “mostly out of the Arena MMA.”

The very first women’s fight in the UFC featured Liz Carmouche against Ronda Rousey at UFC 157. After a loss to Valentina Shevchenko in 2019, she was let go from the promotion the week of her scheduled fight. She was doing media for the UFC when she was informed of their decision to cut her. In an appearance on Ariel Helwani’s MMA Show, Carmouche would later state that she was cut because she kept beating prospects and wouldn’t be able to stay as active as she wanted to.

Her impact on the sport and the rise of female athletes competing in MMA has been incredible. She’s still going strong being a number two ranked flyweight contender for Bellator who has the opportunity to become champion of the division. Her upcoming fight against Velasquez may get her a step closer to being a double champ.

Do you think Liz Carmouche will win the title?