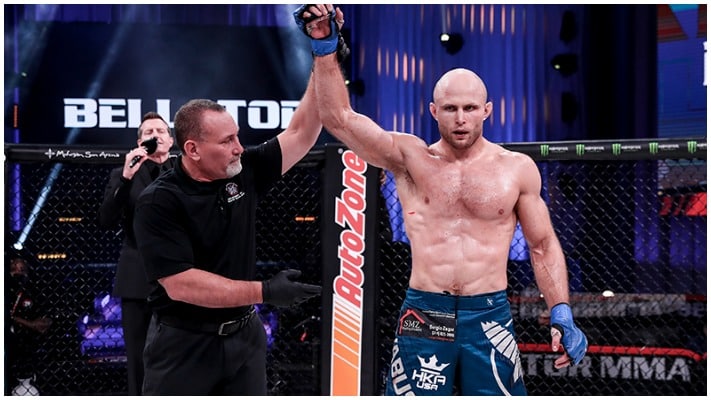 In an interview with LowKickMMA Anglickas stated “For some reason I see a stoppage, I don’t know why I never say that, I feel there is going to be a finish.”

Anglickas will be coming in as an underdog against No.3 ranked pound-for-pound and reigning Bellator light-heavyweight weight champion Nemkov. The Russian-born fighter is currently riding an eight-fight win streak including wins over Ryan Badar, Phil Davis and Philipe Lins.

When asked about asked about being the underdog and if it makes it easier, Anglickas responded “Without added pressure. Yes, yes absolutely everyone’s like he’s famous, he did a lot of amazing fights so everyone is expecting me to lose.”

Anglickas is currently undefeated in Bellator, holding wins over Jordan Young, Alex Polizzi and Gregogory Milliard and hasn’t tasted defeat since his second professional fight. Anglickas also competed on the Dana White Contender Series, winning by submission but not gaining a contract from the UFC.

“I didn’t get signed, whatever,” Anglickas said about his DWCS experience. “I’m actually glad I did not get signed because now I’m just in a much better position.”

Aside from being in a world title fight, Anglickas will also be vying for a spot in the Bellator light-heavyweight Grand Prix final. In the other semi-final sport, Ryan Bader and Corey Anderson will face off in a battle of two former UFC fighters.

When asked for a prediction, Anglickas stated “No idea, the way I see Bader is more of a brute strength power guy but Corey he’ll just put pressure on you and they’re both great wrestlers. One second I say like I see Corey winning the more I think about it I jump back to Bader.”

What do you think? How will Julius Anglickas fare against Vladim Nemkov?