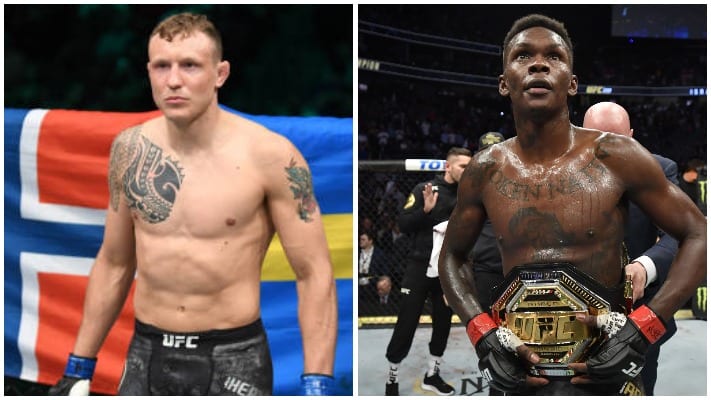 Jack Hermansson is hoping Israel Adesanya becomes dual-weight champion when he squares off against Jan Blachowicz.

‘The Joker’ is currently ranked at #4 in the middleweight division and seems to be just a couple of wins away from a shot at UFC gold. He is set to headline on December 5 and is currently on his third opponent for the bout after Darren Till and Kevin Holland were forced to withdraw before Marvin Vettori stepped up on late notice.

Adesanya made the second defence of his middleweight title earlier this year, beating Paulo Costa inside two rounds at UFC 253. With no obvious number one contender at 185lbs, he announced his intention to take on newly crowned light-heavyweight king Jan Blachowicz. The pair are expected to face off in March or April of next year.

Hermansson told LowKickMMA he is fine with Adesanya putting the division on hold to challenge for a second belt at 205lbs, mainly due to the fact it could ultimately give him the chance to take out a double-champ.

“It’s a little bit early but I think it’s OK,” Hermansson said of Adesanya fighting Blachowicz. “As long as Adesanya wins and comes down and defends his belt pretty quickly in the middleweight division – then it’s all good. But if he loses the fight and loses his hype that wouldn’t be good because I really want to fight him when he is undefeated. It would be cool to dethrone the double champ. So, hopefully he wins and he comes down to defend his belt pretty quickly.”

Despite his confidence Hermansson rates Adesanya among the best middleweight fighters ever and thinks the New Zealander could become the 185lb GOAT with a couple more wins.

“He still needs a couple more title defences to really get up there. But, I think he is amazing,” Hermansson said. “He is a really, really skilled fighter. I want to see him fight a great grappler like myself and see how he handles the ground game because nobody has been able to put him there yet and exploit him. I really believe I am the toughest match-up for him in the division, let’s see if he can go through me.”

Do you think Jack Hermansson is the man to dethrone Israel Adesanya?