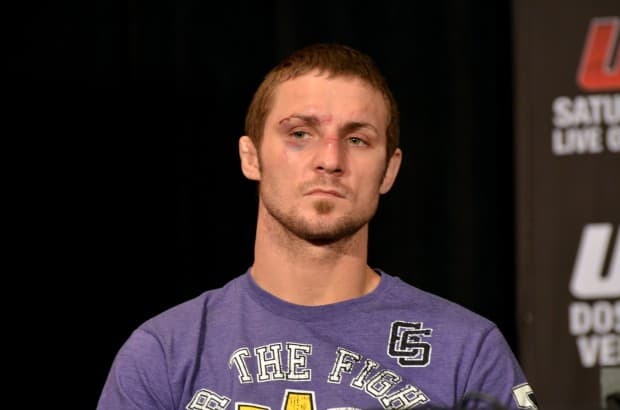 After more than a year off following his UFC Fight Night 40 knockout loss to Johnny Eduardo, no. 6-ranked UFC bantamweight Eddie Wineland will finally return to the Octagon when he squares off with no. 10 Bryan Caraway at July 25’s UFC on FOX 16 from the United Center in Chicago, Illinois.

Wineland considered retirement from mixed martial arts (MMA) after having his jaw broken by Eduardo, but apparently he’s had a change of heart and will look to climb back up the 135-pound ranks. Losing two out of his last three bouts to Eduardo and former champion Renan Barao via knockout, his last win came over Yves Jabouin at UFC on FOX 10.

Caraway will also look to beck into the win column after top-ranked Raphael Assuncao beat him on the judges’ scorecards at last October’s UFC Fight Night 54 from Nova Scotia, Canada. Well-known for being popular women’s bantamweight Miesha Tate’s boyfriend and coach, TUF vet ‘Kid Lightning’ has won four out of his six total UFC bouts and has never been finished.

His wrestling skills should be on full display to prevent noted striker Wineland from unleashing his powerful stories in Chicago.

UFC on FOX 16 features the long-awaited and oft-rescheduled bantamweight title rematch between champion TJ Dillashaw and Renan Barao while Edson Barboza will meet Myles Jury in the co-main event after former lightweight champion Anthony Pettis was forced out with elbow surgery.