LowKickMMA.com
Home UFC News Eddie Alvarez Would Like To Avenge Conor McGregor Loss The Most 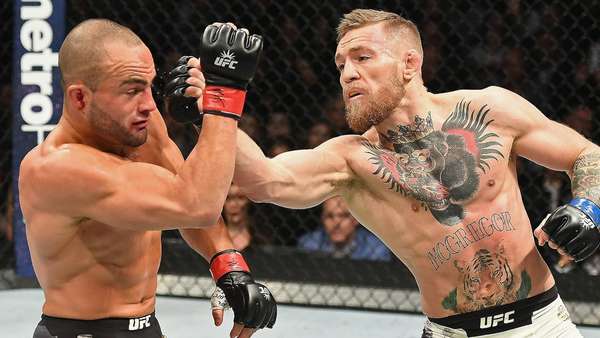 If Eddie Alvarez could avenge one loss, it would be against Conor McGregor.

Alvarez put his lightweight title on the line when he and McGregor headlined the UFC’s first-ever show at Madison Square Garden in New York for UFC 205 back in November 2016. Alvarez talked a big game leading up to the fight.

He called McGregor easy money and vowed to expose the Irishman when they met inside the Octagon. However, it would be anything but as McGregor would totally outclass “The Underground King” as he knocked him down multiple times before getting the knockout finish in the second round.

Later, Alvarez revealed he didn’t stick to the gameplan at all and expressed frustration at not being able to perform on the grand stage, adding that his payday wasn’t a consolation either.

So it comes as no surprise that when a fan asked him which loss he would most like to avenge, he replied with McGregor:

“Without a doubt Connor [sic], I am much better than that,” Alvarez responded.

Alvarez would go 1-2 with one no contest since the McGregor fight before departing for ONE Championship last year. He would lose his debut for the Asian promotion via knockout to Timofey Nastyukhin.

However, he will get another crack at the lightweight grand prix when he takes on former champion Eduard Folayang in the semifinals at ONE: Dawn Of Heroes next month.

Do you think Alvarez could have beaten McGregor if he stuck to his gameplan?