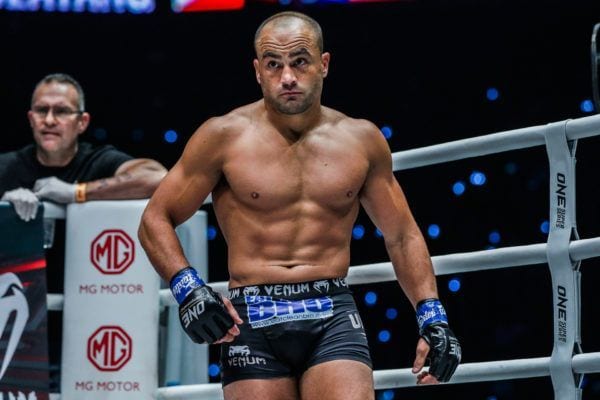 Eddie Alvarez isn’t interested in having his trilogy with Michael Chandler.

“No, I don’t care about him either,” Alvarez said to SCMP. “I don’t because again it’s another guy who doesn’t hold a world title. He wasn’t the champion of Bellator. He got knocked out by the 145 pounder [Patricio Freire], and he’s not the champion of ONE. And he wasn’t the champion of the UFC. He’s not a champion any more, so my goal is set on champions. So, the only guy that interests me or that I’d be licking my chops at right now is Christian Lee. Anyone else, they can do whatever they want.”

Unfortunately for many MMA fans who have been clamoring to see the trilogy it won’t happen. Instead, a trilogy Alvarez is interested in is the Shinya Aoki one.

“Of course,” said Alvarez. “I don’t care if it does. Just being totally honest. When Shinya beat me I was very young in my career. I was super young, I didn’t train jiu-jitsu much, I was still trying to knock everyone’s head off, I was not polished. I didn’t put my game together, so I evolved a ton since he beat me back in 2007. And I think the result when we rematched is pretty much going to be the result from now until the end of time. I feel like I put him away the same way. I don’t feel like there would be a different result to that fight, so I don’t really feel the need to fight him again or the want to fight him again unless it’s for a title.”

What Eddie Alvarez really wants however is to fight the champion in Christian Lee.

“We’ve got to see if the promotion allows it,” Alvarez said. “He says he wants it. The promotion I don’t think wants that to happen. They want him to stay champion for a little longer. The promotion knows what I do to champions.”

Perhaps, if Chandler joins ONE Championship the trilogy will happen down the line, especially if one of them become the champion. For now, Eddie Alvarez is interested in other fights.

Would you want to see Eddie Alvarez vs. Michael Chandler 3?