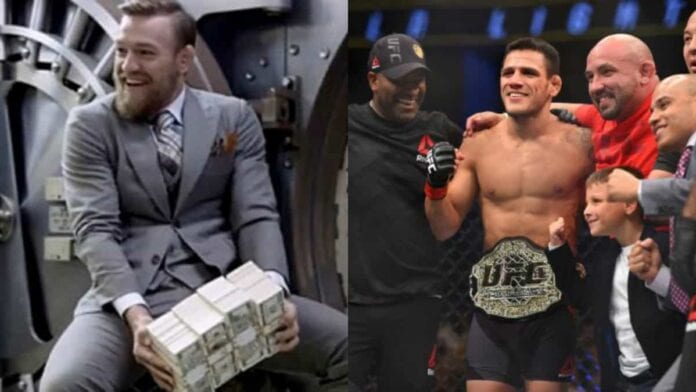 Reigning UFC lightweight champion Rafael dos Anjos put his title on the line for the very first time this past weekend (December 19, 2015) in the main event of UFC on FOX 17 from Orlando, Florida.

So what may be next for the Brazilian champion?

Well, there have been talks of what would be a big money potential super fight between current featherweight champion the “Notorious” Conor McGregor and dos Anjos.

Leading up the much anticipated bout, McGregor made it clear that his plan was to secure the featherweight strap before moving up in hopes of conquering the 155-pound division as well.

Now with dos Anjos scoring an emphatic victory, and the UFC already confirming that McGregor would receive a title shot if he indeed moved up, the stars have aligned for a massive showdown.

That being said, the “Notorious” one has actually opened up as the betting favorite. According to books 5Dimes and SportsBet, McGregor is currently a -160 favorite over dos Anjos.

The bout would sure provide an intriguing clash of styles between a vicious power puncher, and a decorated grappler turned striker as well as an extensive buildup to a scrap between two champions.

Who would you pick to come out victorious?