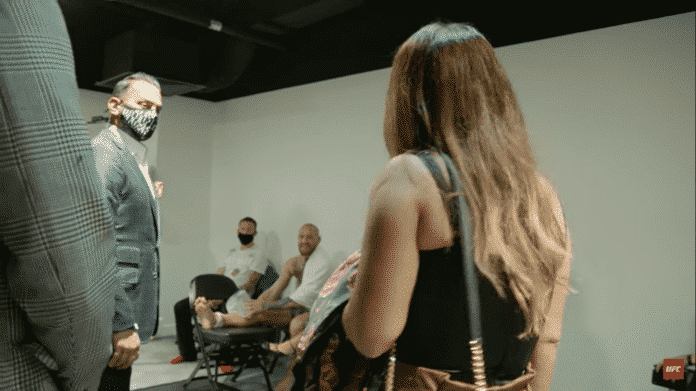 Dustin Poirier and Conor McGregor shared admiration towards each other leading up to their fight, and it appears that continued on afterwards.

Poirier and McGregor headlined UFC 257 in a rematch from their fight in 2014. Poirier was able to turn the tables around this time though, scoring a second-round TKO as the underdog after being knocked out in their first meeting. The two men were respectful in the immediate aftermath, and that carried on into the locker room as Poirier’s wife, Jolie, paid McGregor a visit. UFC cameras filming ‘UFC 257: The Thrill and the Agony‘ caught her thanking the brash Irishman for his $500,000 donation to The Good Fight Foundation.

“I just wanted to say thank you so much,” Poirier can be seen saying. “Thank you for everything. This is going to help change a lot of people’s lives.”

The Good Fight Foundation was started by the Poirier’s in 2017, after Dustin auctioned off his fight kit from his UFC 211 fight against Eddie Alvarez to help raise money. Since then, the organization has gone on to help underserved communities in Louisiana, from providing food security to healthcare and environmental disaster relief. Other UFC fighters have also offered their support to the charity. Khabib Nurmagomedov auctioned off the fight kit from his UFC 242 fight against Poirier for the charity, and Michael Chiesa has partnered with the charity for a sweepstakes, offering his fight kit and a private Zoom call as prizes.

What’s next for Poirier inside the octagon remains to be seen. UFC president Dana White seems to have resigned to the fact that Nurmagomedov is retired, which means it is likely he will finally take the lightweight championship off of him. Many believe Poirier’s next fight will be for the title, but many fighters have claimed they deserve to square off opposite him, and not all appear to interest Poirier that much.

As for McGregor, he said after the fight that inactivity left him feeling sluggish and he would like to be more active this year. As the UFC’s biggest star, a number of fights remain on the table for him, including trilogy fights with Poirier and Nate Diaz.

Donations to The Good Fight Foundation can be made on their website. Additionally, if you happen to have a lot of money burning a hole in your pocket, you can bid on Poirier’s UFC 257 fight kit.

Who do you think Dustin Poirier should face for the title? What’s next for Conor McGregor?