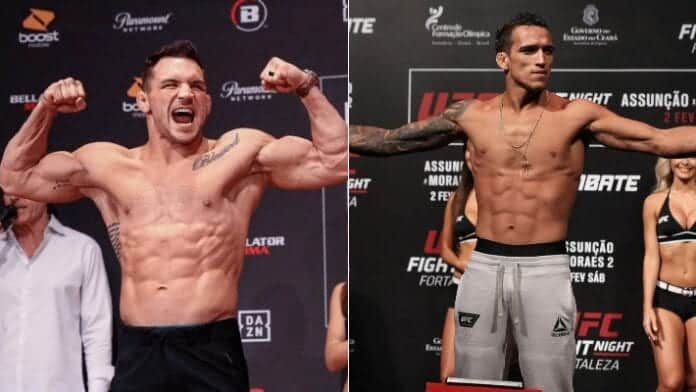 The number 1 lightweight contender, Dustin Poirier, has stated that Charles Oliveira and Michael Chandler should fight for the belt next. This is in part due to Poirier’s respect for the work Oliveira has put in, as well as the fact that Dustin appears to be in limbo in regards to his next fight. ‘The Diamond’ recently spoke to MMAJunkie.com, discussing how he believes the 155lb division should move forward, if he finds himself tied up in contract negotiations. Poirier had the following to say:

This statement once again demonstrates a continued level of class and selflessness that has optimized Dustin Poirier in the later years of his career. However, it also possible that Poirier sees it as his most financially profitable option. Following his recent win over Conor McGregor at UFC 257, Poirier went on to speak to the press about his next potential matchup. Two fights ‘The Diamond’ focused on were either Nate Diaz, or a trilogy fight with McGregor. Whilst both McGregor and Diaz are proven fighters, and undeniably in the upper echelon of the sport, neither are currently ranked within the top 5. However, they are both huge PPV draws, and should Poirier pick up a win against either man, he would likely pick up a substantial payday. Poirier has also stated that he has no interest in a matchup with fellow top 5 lightweight Michael Chandler.

Should Poirier by looking for a fight with either McGregor or Diaz, it would not make sense for it to be for the belt. And such, both Oliveira and Chandler, who are both coming off top-ranked victories, would appear to be the natural candidates to fight for lightweight gold.

Who do you think should get the shot for the lightweight belt next? Do you agree with Dustin Poirier? Let us know in the comments.