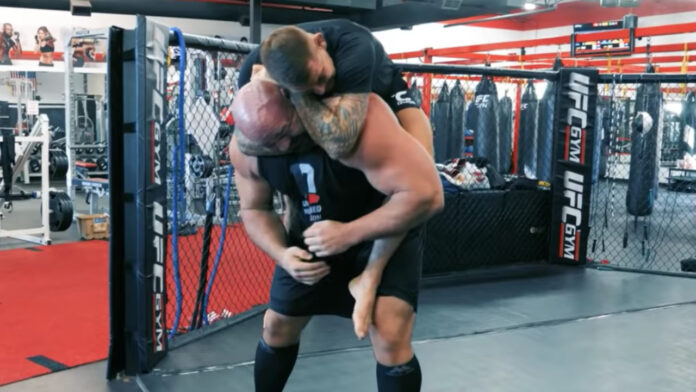 Dustin Poirier was invited to go onto Shaw’s podcast, in which he accepted, where he later that day grappled, and submitted the 400-plus pound strongman.

Kevin Iole of Yahoo Sports recently interviewed Dustin Poirier regarding his upcoming fight with Michael Chandler, as well as his encounter with the former World’s Strongest Man.

Poirier explained: “That’s not the full video. He taps me out later on by just putting his weight on top of me. He’s one of the nicest guys I’ve ever met, but (he’s) a huge individual man, he’s a giant.“

“Just getting my arms around his neck is neck is like trying to grab someone’s waist. That’s how big his neck is.”

Iole then asked Poirier what the effect significant physical strength has in a fight:

Poirier responded: “Strength is a big thing in fights that can (at times) make up for technique. If you’re trying to get up off the mat, or build back up on the fence and you’re technically doing it a little wrong but you have the strength and explosiveness, it kind of fills some of the gaps and makes guys be able to do more than their skillset would allowed them to do.”

How do you think Dustin Poirier will fare at UFC 281?