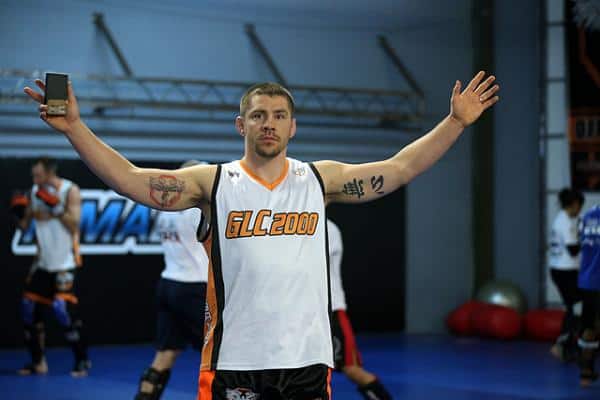 Heading into his prized pupil TJ Dillashaw’s dominant fourth round stoppage of former champion Renan Barao in the main event of last Saturday’s (July 25, 2015) UFC on FOX 16, Duane “Bang” Ludwig incensed his former Team Alpha Male pupils by saying that ‘The Viper’ was the only one of them that truly wanted to be a champion in MMA.

After a fervent backlash from the team on Twitter, “Bang” held firm in his statement in a pre-fight interview, but he appeared on yesterday’s (Mon., July 27, 2015) The MMA Hour to change his tune by offering up an apology to the team he once made great:

“I love you guys,” Ludwig said. “Sorry for being stupid.”

Ludwig clarified his words, saying that Dillashaw simply puts in that extra effort needed to be a UFC champion:

“I say some stupid stuff sometimes,” Ludwig said. “And they’re training at their full potential. T.J. just really wants it. If you look at it in comparison, there’s a difference. If someone is training a certain way — and not just coming out to Colorado — it’s the focus and the intensity and the desire in the room. You can just see it, you can feel it. And it’s just different with T.J.

“They train their butts off and for me to say they don’t want to be champ, that’s not fair. That’s not actually true. T.J. just puts in a little extra effort, a bit more focus and a bit more desire. That’s what I see and that’s what I was truly meaning, not to discredit anybody.”

Once a talented UFC lightweight himself, Ludwig helped Team Alpha Male rise up to the prominent position that they enjoy today. Yet despite all of their successes, they have been losing more than they had when he was their head coach, prompting “Bang” to proclaim that he simply wants to see flagship team members Chad Mendes and Joseph Benavidez reach the top of their respective divisions:

“I want more for them,” Ludwig said. “I don’t think, I know that Chad Mendes and Joseph Benavidez will be champions, they can be champions. The only thing that’s separating them is just a little more focus and desire.”

Ludwig admitted he knows he messed up and probably shouldn’t have said the things he said due to the overall timing of the situation:

“It was bad timing, for sure,” Ludwig said. “Bad timing aside, that’s not fair for me to say. I say stupid things sometimes.”

Overall, “Bang” merely wanted to highlight Dillashaw’s drive to be a champion, emphasizing the clear difference between him and fighters who are not. Ludwig believes it’s a noticeable difference, and while he believes that all of Team Alpha Male indeed wants to become a champion, “Bang” closed by saying his best pupil just wants it the most:

“Everybody wants to be champion, but he wants it the most. That’s what I should have fucking said.”